Rocky: It is not 'business as usual' here, because I'm involved in high-level negotiations to change the world. As a result, Artsy Catsy's hometown, Terre Haute, Indiana, has become a focal point of Campaign 2008. That is, of course, because no presidential hopeful can expect to succeed without the express approval of moi, Mr. CEO Rocky T.V. Herring.

As you know, I recently held a summit here with Hillary Clinton ... 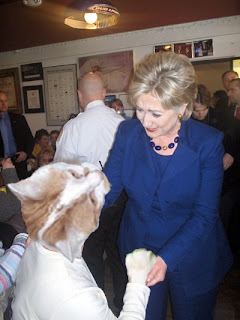 Last week Chelsea Clinton came to Terre Haute hoping to meet with me, but since I prefer to exercise my powers of purrsuasion only upon those of measurable influence, I was too involved in negotiations with Bill Clinton's and Barack Obama's people to meet with a mere former first daughter.

I'm pleased to announce that both Bill Clinton and Barack Obama are in Terre Haute to meet with me today, and I will disclose all details and photos of these important summits with my constituents tomorrow. I must go now; the 42nd President of the United States awaits ... and I really want to ask him about that inhaling thing and offer him some nip.

oh you HAF to get Obama nipped out!

Fantastical. It's about time us cats got more involved: we'd do so so so much better than the beans at runnin' the world. And, as former Hooooosiers ourselves, we applaud you!

Perhaps you can ask Obama if he is planning to get a cat.

Does Hillary know Bill might open his mouth and speak again?

Rocky, try to get them both on some 'nip, then get photos!

Get them on nip! woahhooo!