Callie: If it's not one thing, it's another. First I had to keep going to the vet to get stabbed because I'm so skinny. 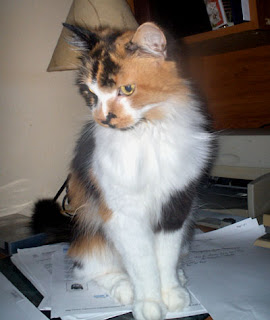 Now I have to go back to the vet today because I have a problem with ... ((blush ... how humiliating)) my nipple. My mom noticed a lump on my tummy a few days ago and when I finally let her look at it, my nipple was all hard and black. And I guess I've been trying to fix it myself, because last night the skin around it started bleeding. What on earth does an 18-year-old ladycat need with nipples anyway? 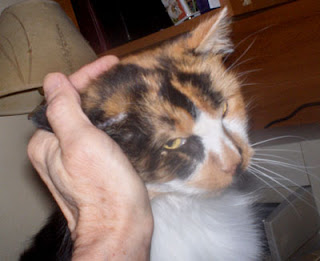 No, scritches will NOT help. I'm 18 years old, I'm skinny, my nipple is bleeding, I have to put up with Rocky and all these other cats, I have to keep going to the vet ... I'd say I have a right to be grumpy! If it weren't for the fact that I now get special high-calorie kitten food, tuna-flavored senior kitty vitamin treats, digestive enzymes and all the bean food I want ... I'd really be grumpy!

(From Callie's mom: I'm very worried about this, especially that it might be cancer. Has anyone had a similar problem with your cat?)

Update from Callie's mom: By the time we saw the vet, Callie's entire lower tummy had turned bright pink and she has 2 degrees of fever. Dr. Shew thinks she has just scratched her nipple and it's gotten infected. He gave her a shot of antibiotics, filed her claws to nubs so she can't scratch it, and is having me put cortisone cream on it, plus he gave me some Hill's Hypoallergenic Treats for cats with skin conditions. He said I should start seeing improvement after 48 hours, but if it gets any worse I'm to take her back in right away, and if it isn't significantly improved by Monday I'm to take her back in then. In the meantime, I have to keep her isolated from the other cats. But the good news is, Dr. Shew says he's confident it isn't cancer.

Callie also has a few scabby places elsewhere on her body and she's been scratching and licking obsessively. She sometimes has allergy problems this time of year, but Dr. Shew doesn't want to give her steroids 1) because she has a fever; 2) because of her age and 3) because they'll make her retain water and we won't be able to monitor her weight loss or gain.

I'm hoping that if we can get this under control, we might find out that her weight loss is just due to allergies.

Thanks to all of your for your advice and support!

I would be worried too. I would definitely recommend an Xray or scan of her tummy. Weight loss was the first thing we noticed with Texas' lymphoma too, well before the lump was found. But hopefully the lump is something benign and unrelated, and she just has absorption issues. We will pray for the best!

We will purr for the best too. We hope Callie will be okay.

Der is a kitty at da shelter dat had a be-nine lump unner one of her nipples. Because da lump sorta cut off sir-cue-lashon da nipple turned kinda bluish-black. She's only 2 years old and is now one nipple short. It was a simple thing and we will purray dat it's dat simple fur Callie...cuz anything else is not akseptable!

A few years ago, Pixie had a lump in one of her nipples and also some discharge. They removed the entire nipple and skin around it and did a biopsy, but it came back benign. She had another one about a year later, and they just used a syringe to take out some of the fluid for examination. I hope Callie's will also just be some benign growth.

We just hope that it is some benign growth!
Purrs and hugs to Calle!

Lots of purrs for Callie. Keep us posted.
She is certainly a beauty for being a senior cat, isn't she.

We hope it's nothing serious, Callie! We're purraying for you! It's tough getting old, isn't it??

Oh Dear Callie, you should have brought it to your Mommas attention earlier! Mommas are there to help you, you should know that by now silly billy..
We is puuring mega much that everything will be ok and it is just something minor:))

Hopefully the nipple problem isn't important. No real need for the nipple, there are plenty more to go around.
-Patches and Nemo

Dear Callie,
We iz sorry dats you iz grumpy & skinny & hazzin problemz wit your lady parts. We reely hopes dat da V-E-T can help. I don'ts know abouts deze lady partsez but I yam sure dats it will be OK. 'Cuz all of us & da restee of da bloggospear iz purrin' fur you.
-Love, Dr Tweety

We're purring for you Callie that it is nothing serious.

Didja go to da vet Callie? Did dey make it all okay?

Purrs and purrayers for Callie. We hope it is just something simple and easy to fix.

Thats awesome news...the first thing running through our mind was oh no cancer. I am relieved to know it's not!

How wonderful that there is good news!!! I will send you some purrs Callie so you feel better very soon :)
Purrs Mickey

We hear ya. Poor ol' Bow is 18 and is doing poorly with his kidneys. His weight is dropping and he has trouble getting around with all of his parts giving up on him. Hang in there Callie. Being 18 kinda sucks, doesn't it? Hugs and purrs to you.

Oh Callie, we iz purrin fur you!! We knohs what its like to puts up wif boy kitties!!

Hey Callie
Seems to be the in thing to do. Go to the Vet. We are glad your results are good, that's so comforting for your mom.
lots of Purrs

I am so glad that it turned out to be just an infection and not something really bad. It would be great if all of Callie's problems turned out to be allergies and there was something you could give her for them. Then she could get back to feeling good again.

Purrs for you Callie. You be a good girl and eat all your food and let your medicines work. The Woman and I hope you enjoy all the extra lovin you are surely getting from your moms!
Smoochies from bof of us :-)

Oh Callie, poor girl, I sympathise, gettng older is no fun at all. We will all send you lots of purrs to help you get over the infection and get the allergies under control

I was really glad to read you update, and I hope Callie improves every single day. Ninna has allergies also, and she does the scratching and licking.