The Department of Blogland Security has announced that Rocky, CEO (Cat Executive Officer) of Artsy Catsy, was wrongfully accused of operating a spam blog and was being held without cause at AbuBloggerGhraib prison.
A reliable source within AbuBloggerGhraib (who declines to be named while torturing innocent bloggers) states that it was the squillions of meowmails sent by enraged cats that forced Blogger to release Rocky and uncuff his paws so that he may once again blog with impunity.

While incarcerated, Rocky suffered horrific torture at the hands of his captors. Upon his arrival at AbuBloggerGhraib, still wearing a bag on his head, electrical wires were utilized to urge him to confess to spam crimes he did not commit. But the stalwart CEO refused to confess to any wrongdoing, furiously shaking his head and shouting, "No, no, no, I don't know anything about Spam ... anyone can tell you I'm a tuna guy!!" 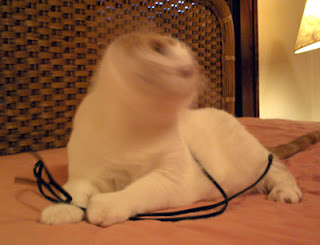 Even when subjected to waterboarding, Rocky held strong, maintaining his innocence throughout his ordeal: 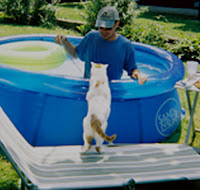 Upon learning of his imminent release, Rocky immediately chewed the electrical wires off his body, while Fracas waited to transport him back to Artsy Catsy: 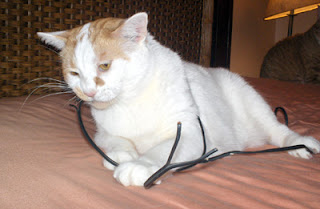 Now suffering from Post Traumatic Stress Disorder, Rocky has been ushered away from hoards of paparazzi to an undisclosed location where he will rest and recover. 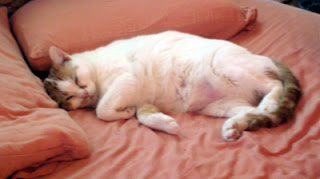 In a press conference, Artsy Catsy VP Fracas expressed Rocky's heartfelt thanks and eternal catitude to his fellow bloggers who organized a worldwide effort to ensure his release ... including meowmail campaigns, protest marches, and yakking and hurling hairballs and other noxious articles at Blogger and their spambots.
While the FREE ROCKY movement was far too massive to detail all contributions, Fracas said it included:
~~ One-Eyed Jack's contact 0f Amnesty Intercational;
~~ Eric & Flynn and KC's pooping on Blogger's pillows; Mr. Hendrix's boost of this effort by taking an extra dose of Laxitone; and the Crazy Meezers' hurling of litter pan gifts to Blogger all the way from Australia.
~~ Daphne & Chloe's offer to send Rocky a tuna loaf with a file in it ...
And Fracas sent a special thank you to Rocky's dear friend Lilly Lu for donning her special muscle shirt to help wrestle Blogger's spambots to the mat!
Posted by Artsy Catsy at 1:48 PM

We are quite glad that the letter writing campaigns that we all participated in worked and that blogger has now allowed you back to blog...

Yeah!! I'm so happy it worked and you are back!! At least we know there are some people behind DP Blogger...somewhere...

Astrid (…and the kitties too) said...

It's so good to hear you're free again. Take a good loooong nap to recover from all the stress!

rockster! glad you're back!!

that'll teach that dopey DPB not to mess wif kitties!!

Yay, we thawt that maybe we were gonna hafta feed a june bug to Speedy and send him over to Blooger!

Rocky, we are so happy that you are free again. How very brave you were to withstand all the tortures they put you through. Let's hope that this sort of thing never happens again!

Woo Hoo, so glad your a finally free Rocky! We gave blogger what for, they won't be messin' with cats again.

YAY! ::Waving paws in victory!:: Owr efferts paid off and Rocky is free!

Hooray! Hooray! Rocky is FREE! Now you must rest and recover from the terrible ordeal.

::spin::
Yeah! Rocky's free!
::spin::
I bet it was those hairballs that did it.
::spin::
I herd there be more cat blogs than any ofur kind, so they shouldn't cross us. I hope Rocky will recover soon.

Yippie!!! You're back! We missed you. Poor Rocky, he may need some therapy in the form of cans and cans of stinky goodness (all gluton free of course) to forget this trauma.

Oh thank heavens! Someone's head should roll for what they did to you. This goes all the way to the White House!

It's good to see you are a free kitty once again Rocky! You have a lot of support online! Blogger mustn't have known what had hit them when they got all the outraged emails! Hehe!

Yay, Rocky is FREE! Power to the Felines!

Hooray, Rocky is free! I knew we could do it! I'm so glad you are back!

So glad to see you back Rocky. It must have been terrible for you. Take a few days to recover. It goes to show what happens when a group gets together for a good cause. Congratulations.
Samantha & Tigger

I'm glad you're back, too. But I have to say that I was looking forward to rounding up the cats of the blogosphere to record the fundraising single 'Does Rocky know it's Christmastime?'. Oh well. Better that you're out!

Rocky, I am so relieved that you have been exonerated from your accusations. But now you have to recover from more abuse. After your rounds of goop in your ears and liquid yuck down your throat, I'm not sure you will ever be the same. Maybe you should hire a company psychologist for a debriefing session.

Yay! I'm furry glad that you're free and that Blogger has reinstated you! I am goin' to take a tiny bit of credit for your release from virtual prison, 'cuz I wrote an absolutely SCATHING email to those evil robots who held your bloggie captive and insulted you and called you porky luncheon meat! Spam®? I ... Think ... NOT!
DMM

Yay! I'm furry glad that you're free and that Blogger has reinstated you! I am goin' to take a tiny bit of credit for your release from virtual prison, 'cuz I wrote an absolutely SCATHING email to those evil robots who held your bloggie captive and insulted you and called you porky luncheon meat! Spam®? I ... Think ... NOT!
DMM

This is wonderful news ... just relax and take all the time you need, Rocky!

Yay Rocky! I'm so glad you are free now! Rest and recover. :)

Yay!!! Rocky is free again! I am so happy! Kitty power!

Right On! Welcome back!

I'm late to the release party -- I just found out about the incarceration today! Sorry you had to go through that - I'd imagine it was extremely frustrating. If you'd ever like to take your blog off Blogger, and host it independently, please let me know. I can help.