Rocky here, telling you that poet Robert Burns was right on target when he said, "The best-laid plans of cats and CEOs often go awry." Yessir, ole Bobby hit the nail right on the head, because everything keeps throwing monkey wrenches into my Artsy Catsy plans!

I can't get our humans to stay on target. First, my human artist Sharolyn has been overwhelmed with work she's doing on the websites for Neoteric Hovercraft, the World Hovercraft Organization and especially DiscoverHover. I haven't even been able to blog for days now because she's hogging the computer writing and editing Curriculum Guides for teachers all over the world whose students are building hovercraft. I mean, why is she writing things like "Bernoulli's Principle and the Coanda Effect" and "Newton's Laws of Motion" when there's an Artsy Catsy website still to be written???

We have a Catvisory Board out there ready and willing to help us create our website, but nooooo .... my human artist is too busy writing stuff like "an object at rest tends to stay at rest unless acted upon by an outside force" to write emails to our Catvisory Board! Well, let me tell you, I'm an outside force and I'm gonna be acting on her soon to make her get back to Artsy Catsy work!!

And when she's not messing with Laws of Motion, she and Suzanne are messing with those feral kits in our basement. This is the newest one, the fourth (and last one) they've brought into MY house: 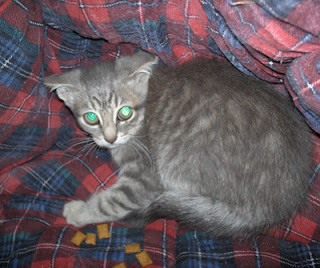 As you can see, they haven't had much success so far in taming this poor, horrified thing. I think they should let me go down there and have a talk with it. As a former feral myself, I think I'd have much better luck taming those kittens than somehuman who spends her time immersed in the laws of physics! She's probably reasoning with the poor babies by explaining kinetic and potential energy to them!

I'm ready to give up on these Artsy Catsy humans as totally useless. In fact, I think I'll just practice some physics myself and spend the rest of Monkey Wrench Monday illustrating how "an object at rest tends to stay at rest" ... 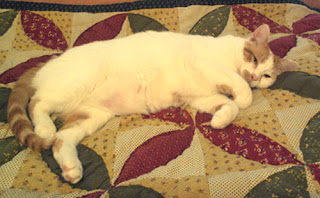 My goodness, you guys do lead active and busy lives! We're impressed! FAZ

Oh Rocky, I don't know whether to be happy or sorry that your humans are so busy! Hovercraft sound very cool! My humans and I enjoyed the episode of "Mythbusters" where they made their own hovercraft! Your latest feral foster is very cute, but does look rather scared. Hopefully with lots of love and attention this little one will come around.

We like dat law, we'll stay at rest thankyouverymuch!

wow! you guys are so busy. don't worry about your catadvisory board. we're ready and willing whenever you are! just remember rocky, all that work buys our stinky goodness so it is a necessary evil. i don't like it either tho.
hey, as for the law of motion. i think that is sooooooo true. i am at rest, until and outside force (the flashy box, the vaccuum, the hairbrush, the Qtips - cause that means I get my ears cleaned)acts upon me. whoa, those beans are smart.
poor feral kitties, they look so scared. sending virtual comfort vibes as a former feral to a feral.

Scout sez she's gonna stay at rest and has no desire to move (even for food). I think I'm more a kinetic energy source myself!

I wish I had my own hoverkraft. We saw that episode on Mythbusters, too! Good Luk on getting yer hyoomans to help. My Food Lady has cut WAY BAK on the time she spends helping me sinse she's so bizzy at the place ware she goze hunting during the day.

Zoey and the furballs said...

Excellent illustration of an object at rest!

Awwwww...poor little feral. I know how she feels, I wish I could tell her (him?) that it's gonna be OK, it's gonna be great!
We're here when your human and you are ready!

I agree with the object at rest principle. Let me rest.


one more fing we beeter get cracking i just got my new dress to were to the opeing of arsty castys.com and even better it came wiff a catnip toy

At my house it's the summer doldrums. It's always something.

Wow, that is a very good visual illustration of "an object at rest tends to stay at rest." Good luck taming the poor little angel. Hopefully he will not be frightened for very long! Those humans will come around!

And...TAG, you're it! We are tagging you guys for a meme, come by our blog to see.

Maybe you should start a petition - it werked fer us!

Your latest feral kitten is very cute. I hope he or she stops being so scared soon. Your humans sure know how to keep busy. Good luck getting them back on track.

I find humans mostly useless these days. They don't even stop to give me treats because they are too busy. Summer time seems to steal their time.

I can tell the little feral kitten must be scairt, because he is not even eating his Temptations!

Humans are so foolish.

Your Law of Motion works for me, too, Rocky. I'd be glad to be a satellite research fellow on that project. I'm gonna go start restin'!

The little grey kitten is very very cute. Prinnie saw some cuties at the vetlady... 2 orange ones.

We hope things settle down soon. Rocky get things back in control!

You have to put up with so much. Things *have to get better ... don't they?