"My name is Callie, and I'm a formerly feral" ... and I would like to share with you below the 12 Step Program that transformed me from feral to formerly feral. But first, a pictorial review of my own recovery ...
Here I am in 1990 with my brother, Red, just rescued from a garage by our bean, who wore body armor and gloves because we were wallowing in the throes of feralhood ... 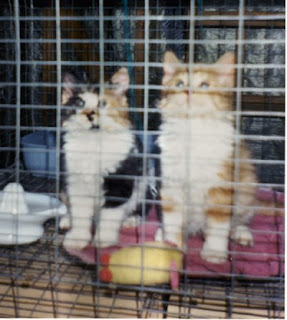 "Treats, you say? Okay, just let us out of this cage and we promise we won't tear off your other arm!" ... 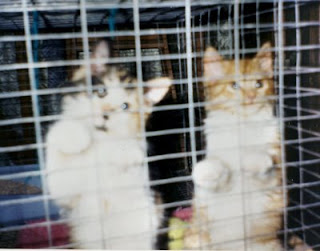 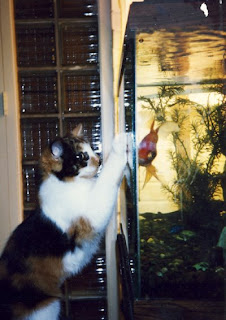 Here I am in 1994, touching base with my Higher Power atop my mom's 8-foot-tall art show display ... 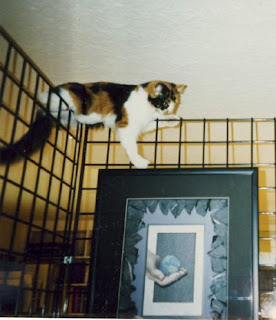 And here I am today, fully formerly feral ... well, except when temptation is just too great, like when Rocky looks at me ... 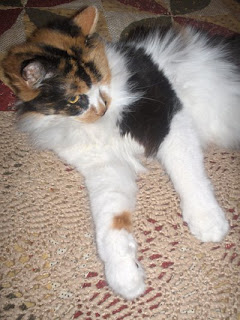 THE TWELVE STEP PROGRAM FOR FERALS:
1) I admitted I was powerless over being feral — that my screeching, scratching life was unmanageable (so I could get out of that cage).
2) I believed that a Power greater than myself (and a steady stream of treats) could transform me to formerly feralhood.
3) I decided to turn my ferocious feralness over to a Higher Power.
4) I did a searching and fearless moral inventory of my feral self (over a pile of treats).
5) I admitted to a Higher Power, to myself, and to my beans, the nature of my feral misdeeds (so I could get more treats).
6) I allowed a Higher Power remove all my feral defects of catcharacter (anything for treats).
7) I humbly asked a Higher Power to remove my feral shortcomings (i.e. shredding skin).
8) I made a list of all beans, cats and other species I had put the bitey on, and became willing to purr on their wounds (because scritches from bloody hands are SO messy).
9) I made amends to such beans & critters (except when to do so made it too tempting for me to scratch their eyes out).
10) I continued to take personal inventory and whenever I fall off the whapping wagon I promptly admit it (so I can get some treats).
11) I sought to improve my contact with a Higher Power, purraying only for knowledge of how to stop biting & growling & scratching & screeching (and a few purrayers for more treats).
12) Having had a spiritual awakening as the result of these steps, I try to carry this message to fellow ferals, and to practice these principles in all my cataffairs (as long as the treats keep coming and Rocky doesn't look at me).

So, does Rocky look at you?

Not if he knows what's good for him, and when he does he squints & scrunches up his face!

Callie, that sounds like a great 12 steps for ferals! You were an adorable little kitten and are a beautiful ladycat now. We are glad you found a wonderful Forever Home.

we need to get Bill into this program FAST

That is funny! I am glad you are now a recovering feral.

We love the 12 steps for freal recovery. Dante was a former feral so we will make sure he studies this list well!

I wish such a program had been around for Gemini when she was still a little bit feral.

That's a cool 12 step recovery program for ferals, glad everything is going well for you guys!

We will have to make sure at least four members of our household study this list very closely...lol.

Did we read this right? Callie is 18 years old?

Callie, you've worked the program really well. Now, it's time for you to be a 12-step sponsor to other kitties battling feralness (for treats, of course).

That is an admirable program, Callie. And I like it that is works through positive reinforcement (that is, treats).
Your buddy, Jimmy Joe

Congratulations on a full and happy new life. My before sister, Kirkby, was formally feral too but it took her five years to recover. FAZ

What a great program you have designed! You look so happy!

That's great, and so obviously adapted from the Big Book. We're glad that Callie was able to work her program so well. We agree with Quasi, that it is time for her to be a sponsor.