Rocky: It's Sooper Toosday (again). I call on all DemoCats in Kentucky and Oregon to get out and vote and put an end to this lo-o-o-o-ng campaign season. It's time for our humans to get their faces out of network news and resume the important business of Temptations distribution, affection allocation and scritches sharing!

As you know, I've been appearing with both Barack Obama and Hillary Clinton in front of their audiences of 75 squillion on the campaign trail. Here I am with both of them at their recent appearances in my hometown ... (note that neither of them are wearing flag pins; I alone am displaying my patriotism) ... 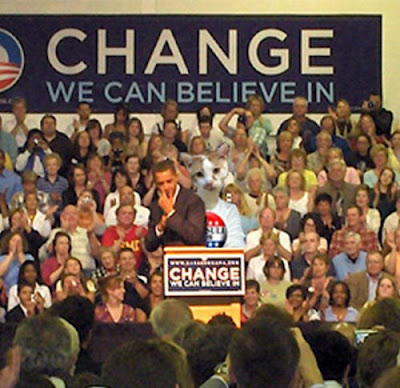 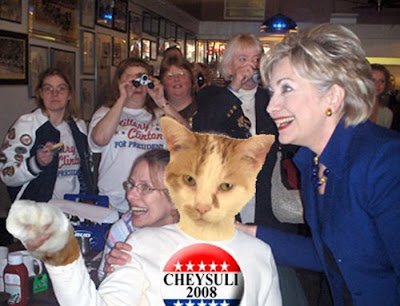 And now, once again, on this 948,327th Sooper Toosday, I urge them both to drop out of the race before they destroy the DemoCatic party. Cheysuli is the only true Candidate for Cheynge ... who is not only ready to lead on day one, but also has the experience to knock the phone off the hook at 3 a.m.!!
Posted by Artsy Catsy at 9:49 AM

You go! How refreshing to see a Chey supporter being so involved in keeping her name before the Democratic party. Keep up the good campaigning.

American politics confuses us to no end! We don't understand why there is a separate election for the President. In Canada, the leader of the party that wins the most votes becomes the Prime Minister (head of government, like the President).

I am so honored Rocky that you are fighting inroads for me in the Democatic party (but don't worry I will continue to run as a third party candidate)!

Right on, Rocky! Chey for President!

hehe, we Ballicai agree 100%! We think alla the bean kandidates should drop outta the race and consede it to Chey. She would make the bestest Prezziedent!

Whoo Hoo....Chey for President!!! We agree with everyone! Chey would be a great President!!!

We let Mommy up from bed rest so that we could visit our friends. These pictures are fantastic.

A vote for Cheysuli is a vote for all Feline Americans! I don't fink the other candidates understand the need for upped cat treatsies production and more funding for hairball remedies!

I think you should broker a deal between the two candidates. Perhaps you, as the go-between, could offer them positions in Chey's cabinet if they play their cards right.

I agree, it's Chey all the Way. FAZ

Dats funny bout the flag pin. When Mommy is not waring her wedding ring she ses it meens she's not married. Daddy sez "i beg to differ". I'm votin for Chey too!

We're beginning to think that this nomination process will NEVER end! Interesting to observe from afar, though. One of them will have to end it soon... or they could both end it right now and endorse Chey!