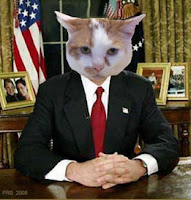 My fellow citizens, as your self-appointed Cat-in-Chief, I have called this press conference to respond to today's guilty verdict in the Scooter Libby trial, which does not bode well for his boss, Dick Cheney. Libby was implicated in leaking to the press Valerie Plame's identity as a CIA agent, and now Cheney may be in deep dog doo.

First, let me make it clear that was not Cheney behind me at my State of the CatUnion address. That was a manipulated photo, which I was not involved in, was totally unaware of and did not cover up. An unnamed staffer inserted a Cheney image behind the actual photo of me at the podium.

Second, I have never met Dick Cheney and he is no friend of mine. Of course, that depends on what the definition of 'is' is. But let me assure you that I have never had feline relations with that man! I have never spoken with him, doctored intelligence with him, gone war-profiteering with him, and I certainly have never gone hunting with him.

Third, I have no association with Scooter Libby. Although there are rumors that Libby may be a scapegoat, with a name like 'Scooter," he is obviously a not a goat but a dog, and I do not associate with dogs. Cheney may be going to the dogs, as well; rumors of his impoochment are rabidly circulating.

As you know, this whole sordid affair began with the claim that Iraq tried to purchase yellowcake uranium from Africa. Actionable intelligence from my own FBI (Feline Bureau of Investigation) has proven that it was not yellowcake but a big yellowcat hairball produced by African lions, which Saddam's government officials hoped to hide behind when the coalition of the willing invaded Baghdad.

In closing, you have my assurance that anyone found leaking in my catministration will be promptly fired and confined to a top-security litterpan for the rest of their natural nine lives, where they can cover up all they want. And to anyone who says I had anything to do with this mess, I say bring 'em on! As I've said many times, fool me once, shame on ... shame on you fooler; fool me again, no matter how foolish feeling like you can fool me, you fool, fooling me twice or thrice times fooled you can't never get fooled on no more.

No, I will not take questions. It is my policy to not comment on ongoing investigations, even after they're not ongoing. Direct your questions to:

My goodness, you are a great Cat-in-Chief. Way to distance yourself from that Cheney and Scooter "dog" fellow. I can not doubt your face, it is to honest! After all, we kitties don't fib, we tell it like it is.
Photoshop is totally dangerous and can ruin reputations!

HAHAHAHAHA. Mommy's parents hadded a cat named Scooter. She saided that he was psycho. For real.

Hmm... so were you in on the whole yellow cat fiasco? You see if you are in power, that makes one assume that you had something to do with the whole war thing...?

Oh no, Chey, I can personally testify that Rocky had nothing to do with the yellow cat fiasco. He has plenty to do with oour yellow cat Fracas, but not the fiasco!

Talk about spin and plausable deniability! You will go far...

Rockers, I love the press conference binge you are on lately. If you went hunting with Cheney, you might not have survived :) That's one big hairball. Impoochment, indeed. All dogs should be locked on the back porch. I love the suit. Photoshop rocks, so to speak. One question:What about Karl Rove?

That Cheney! What a nut. Do not ever go hunting with him, either.

Yoor furry wise not to go hunting with Cheney. Mom sez all doze heart attacks musta caused lack of oxygen to da brain. If we cood only figger out what's wrong wif da other one...

An unnamed Cathouse staffer told me that Karl Rove's real name is ROVER! It's definitely time we get the dogs out!

Fool me foolish you fool... Eep! You can fool all of the people none of the time...
Wif Scooter an Rover, it's soundin like a dogtatorship again. Who let the dogs out?

Excellent - you should be running the country. FAZ