Rocky is a blog hog!! You'd think this entire company is all about Rocky! Well, anybody with any sense at all knows that a company's most valuable assets are it's employees. So today the cat staff has booted Rocky's big behind off our blog so you can meet some of us other formerly ferals!
We first present Ivan, our meezer Information Technology Director, and Bitsy, our Director of Corporate Espionage: 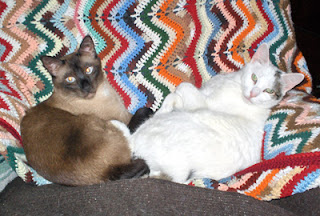 Ivan came to Artsy Catsy from a poor excuse for a pet shop, that was closed down by city officials. He had been adopted out to a family who returned him because they said he had "distemper" and was mean and grumpy. From the day we brought him home, he has been the sweetest, most loving meezer in the world and hey, this cat knows his way around a computer!

Bitsy was adopted when she was a tiny kitty in our backyard by Ugly, a former feral who lived outside with us for several years. Ugly raised Bitsy as if he were her mother, and you can see a portrait of them here. They were inseparable, but Bitsy would allow no human contact whatsoever until Ugly passed over the Rainbow Bridge. The humans spent weeks trying to console her until she finally let them bring her inside. She had to be separated from all the other cats, until the day we brought Ivan home, and they immediately became best friends. .....
..... Next, we present Blackie Bear, another former feral who lived outside with us for two years before he decided to come inside: 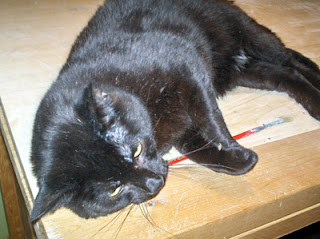 Blackie Bear is a fierce former tomcat who loves humans but is still aggressive with the cat staff, so he became our Safety & Security Manager. His office is located in our upstairs art studio, where he can overlook the entire household and perform important security tasks such as checking paintbrushes for dirty bombs. .....
..... Finally, we present Oscar, our Maintenance Manx. He came from a litter of kittens found in the fireplace wood in our backyard: 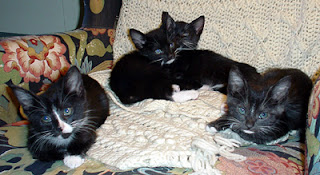 The Artsy Catsy humans found furever homes for Oscar's mom and littermates, but since Oscar was the only manx in the litter, he was concerned that not everyone would appreciate him as a tailless wonder, so he decided to stay on as our maintenance guy. And he does a great job ... except when he loses his balance and falls off his chair or in the human litter pan! .....
..... So there, Rocky! You're not the only cat in the woodpile!!
Posted by Artsy Catsy at 12:21 PM

Ivan and Bitsy, you are both just gorgeous. I especially like Bitsy's, what looks to me like a scrunchy hair thingy around her ear, lol! I'm so glad all four of you "formerly ferral"!

Well thank you for the introductions! I can't believe that someone would dare to return a meezer, or any cat for that matter, but some humans just aren't intelligent enough to appreciate the natural wonder that is the feline. I think all of those cats are beautiful.

It is so nice to meet all of you! You all perform important jobbies at Artsy Catsy so although Rocky is the Pres., you should make sure to get your time on the blog too. Ivan, you have such pretty colored furs. Mommy says she'd be stroking you all day (I say hey, what am I chopped liver??? mmmm chopped liver) and Bitsy, we're so glad you found a buddy in Ivan. You have such a pretty face and that expression shows you get your way a lot!
BlackiBear, as a black cat and former feral myself, I gotta say, you are a credit to us "former ferals." Great job as Safety & Security officer. I know my vet says that a sibling would "not be a good idea for Hendrix" so don't feel bad that you like your own space.
Oscar, Manx cats are cool! What a sweet kitten you were. Now a handsome & dignified cat (that NYE incident aside of course....) Good job keeping the others tidy and organized.
Hope to see you all again soon!

Thanks for introducing us to the other employees. Bitsy and Ivan, you are cute!

Blackie Bear, I like your name, it suits you. You have an important job, too.

Hi Oscar! I like tailless cats, you are special.

Hello all! Ivan, I can't imagine a grumpy meezer. They must have been awful people. I'm glad you found a good home finally.

Awww, we are so happy you all have found such a great home and jobs too! Wow. Beautiful Kitty Cats and the portraits are fantastic!

It is great to get to know some more of the Artsy Catsy staff. I love the organization that you have in your company. Every one seems to know their job and do it well.

I enjoyed reading about the background of the other ArtsyCatsy cats! :) You are all lovely cats and it is wonderful that you found such a great Forever Home. :)

Hi everyone! It's good to meetcha'! You are all beautiful and you all have jobs! That's very impressive. It's nice to get to know everone a little better.
Purrs!

It's great to read about how these beautiful cats came to find a forever home with artistic humans. I think my humans could use a maintenance manx, too. There is a lot of stuff lying around here that needs to be fixed.

Hey there! In response to your comment on my blog, re the hovercraft: we live very close to the seafront and see the hover every day. I haven't yet been on it and I think it would scare me to be honest but the human's use it all the time.

What wonderful cats! It's very nice to read about you all ...

Opps...Wocky's behind's been booted!
But anyway, I've just tagged all of you!
Come mine bwog and see!

It's reely grate to get to kno the rest of the groop at Artsy Catsy. Thanks for telling us all abowt you!

Finny & Buddy, Grady & Gilmore and the beans too

How adorable! And what a great staff! You all look well chosen for your tasks! And may I say, I know you weren't hired for your looks, but you're all very good looking!

What great stories! Your beans are furry speshul!
LOKi