We're home from the vet trip, and the good news is Rocky doesn't have cancer! He has glandular hyperplasia, and secondary bacterial and yeast infections. The vet explained that cats who produce too much ear wax are very prone to develop this condition. We know several of our kitty friends have said they produce too much ear wax, and Rocky says to tell you to LOVE those ear cleanings as much as you love Temptations so your ears won't get like his!! (He's resting right now, after an exhausting two days.)
Unfortunately, the damage to his ears can't be reversed, and this is a chronic condition that will require lifetime treatment. But we're just so happy it wasn't cancer, because the type of cancer that typically occurs in cases like this is basal cell carcinoma and it isn't treatable when it's in a cat's ears.
Now he gets Animax in his ears twice daily for ten days and antibiotics (Clavamox) for ten days. After that, he gets his ears cleaned twice a week forever with a prescription earwash called T8 Keto.
His 160 mile roundtrip today wasn't nearly as frightening to him as his short trip to the vet yesterday. He moaned only for 40 miles, then settled down for short naps in his covered carrier for the rest of the trip. And the vet's exam room has a high window ledge overlooking a courtyard that he could look out when he wasn't being examined. Even with an interesting view, he looks a bit worried: 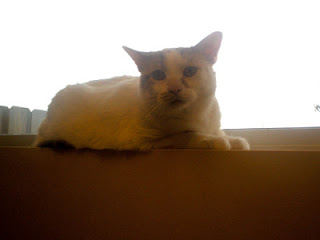 Oh, and while he was there, good CEO that he is, Rocky sold an Artsy Catsy cell phone charm to the vet! What a guy! Even when he's sick, he's still our beloved hard-driving Cat Executive Officer!
Thank you all so very, very much for your caring words and support! Cat families are the best families in the world!
Posted by Artsy Catsy at 7:31 PM

OH! WHOOO HOOOOO YAY IT'S NOT CANCER!!! We is sorry that you has to haf your ears cleaned out so much, but we is furry fankful that our furriend is OK!!!

You is looking furry scairt in that pikshur, but you can smile now!!!

Hooray! Hooray! Hooray for Rocky! I am so happy he does not have cancer. I was very worried. Now I can do the dance of joy. Right after I get my ears cleaned.

Hi Rocky,
I'm so glad your mother took you to a competent vet. You should put the bitey on that last doctor for scaring her.
I have excess wax in my ears too. My mother uses a spray and swabs. I don't like having my ears cleaned,but it's better than goopy wax.
Muffin

My mom and I are so glad to hear this news. Mom said she was online today researching cat ear problems after reading about Rocky.

We're glad he didn't have too scary of a ride either. Rest tonight, Rocky!

Hooray, Rocky! We're so happy to hear your good news. And, what a good CEO you are to make a sale while you were there.
Relieved in Lansdowne,
Mr. Chen & Ollie

Oh, Rocky! It IS your lucky day. ::spin:: I's so glad yur Mom took you to the bestest vet insteada beleafin the mean vet. ::spin::
Nice job sellin a cell phone charm, but you're allowed to rest a bit after all the trauma. Rest now, my furiend, the werst is ofur.

What a relief. I was worried. Cato

Smeagol and Strider, Mystery (Sunnin' at the Bridge) and Gizmo too! said...

Yay! Now you and your mom can get some rest! We're so happy to hear the good news!

Oh Rocky I'm so glad to hear you don't have cancer! It doesn't sound fun to have your ears cleaned so often but it has to be better than whatever they'd do to you if you had that awful disease.

I hope you can relax and recover from that long trip. You were very nice to still be the CEO and make a sale while you were having so much trouble for yourself.

Yay, we'z sooooo happy to hear dat yoor ear problem isn't cancer! Dat word is furry scary. Now you can get a good nights sleep (and so can yoor mom) and get back to snoopervising like a good CEO.

Sleep well tonight, Rocky. Take it easy for a few days. Maybe you should consider taking a couple weeks leave of absence, and just kick back and do nothing but recover.

Hope Rocky (and Sharolyn) don't have too many problems with Rocky's treatment. ;-)

Oh Rocky, I'm sooo happy! Although that look on your face broke Mom's heart and made her eyes water a bit. You are a tough guy, so I'm sure you will be good about taking care of your ears.

We are so pleased to hear that Rocky will be all right! Thank goodness for Vets that know their practice!

Rocky, I am so glad to hear it's not cancer! That's great news!

HIP HIP HOORAY! NO CANCER! WOO-HOO!
Medicine and ear washes = no fun, but way better than cancer. We are so happy that Rocky is gonna be OK. And what a CEO! Sellin' all the time!
Smooches!

Yea for rocky !!!! i so glad your okay i been worried sorry i called it any early night last night so i never got the news till this am i was on a romtictic date you could werer you redsox hat to cover your ears

oh, yay, oh YAY!!!! you are gonna be all fixed up and not be bothered no more by your ears!!! an' bestest of all, it's not cancer. we are so happy for you and the staff and your mom!!! sometimes we hasta do stuff we don't like (v-e-t trips) for our own well-being. we are proud that you only moaned for 40 miles (and proud that your mom had the grit to take you, knowing how upsetting it would be for you). gosh, YAY!!! YAY!!! rocky's gonna be OK!!!

What a relief! Dear Rocky, be a brave cat and sit still for your ear cleaning and medicine. And be sure to ask for extra treats!

Rocky, while it may not be fun to have your ears cleaned twice a week, it is better than having cancer in your ears.

Extra treats should be offered everytime you get your medicine or ears treated. It is only fair!

Plus good salecatship! A good cat is always looking to make a sale!

Oh, I cried with relief on reading this news. I couldn't find the words to comment yesterday, but I was routing for Rocky, because cancers in the ears, especially in white or light cats, are unfortunately common here in the Canary Islands (caused by exposure to the sun) and, consequently, I am more familiar than I wish to be with the usual treatment and outcome.

That is good news . We are furry happy furr yoo.

I am SO SO SO SO reeleeved and happy that yoo don't have canser!!! I was vary vary werried abowt yoo!

Yay! We are so glad you are going to be okay. Be sure to get extra treats from your Mom.

All right, Rocky! That is great news. At least the antibiotics won't be forever.

We hopes you went to them other bean VETs and rubbed a little ear goo in their faces! Wacko vets!