Only 2 more days to the Artsy Catsy
Thanksgiving-Christmas fundraiser
for
Cat Friends Helping Friends at the Cat Blogosphere
and the Rescue Farm!
Today I'm going to let Jodi tell you in her own words how Jeremiah the horse, and his seeing eye cow, whose name is Two Percent, came to live with Jodi and Matt at the Rescue Farm .... 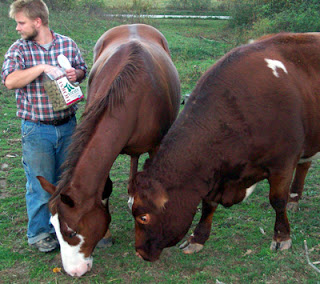 "In 2001, we heard about a rancher whose wonderful horse, Jeremiah, his companion and riding pal for 9 years, had gone blind from a vaccine reaction. The rancher said he wasn’t going to spend money for 20 more years on a horse that couldn’t “do anything in return.” So, of course, we took Jeremiah.

We doted on him, but he just seemed lonely. We thought it was our lucky day when the police called and asked if we could take a stray horse they found near the highway. She was skin and bone! We named her Lurlene and she and Jeremiah hit it right off. After 3 weeks of vet care, she was a different horse; she was playful and filling out nicely and so happy to be loved! But I woke up one day and went outside to find Lurlene, and a colt, lying dead beside Jeremiah. The vet said she’d been so ill and thin a month earlier, she’d probably already lost the colt, so with no heartbeat they didn’t discover she was pregnant.

The day we found her was Christmas Eve, and Matt & I were so devastated we stayed in like hermits for the whole holiday.

Jeremiah wasn’t himself after losing Lurlene, so we started looking for another horse that needed to be loved. Then came Cody, an 8-month-old male horse who was born with a twisted backbone, and his owners were ready to send him to “sale” (aka slaughter for meat.) We brought Cody to the Rescue Farm and fell in LOVE with him! He was so sweet and loved his treats and basking in the sun.

Because of his defective spine, sometimes he couldn’t get up from lying in the sun and Matt & I would have to get him back on his feet – it often took us hours. After a year, he started having more and more trouble until we were pulling him up every day. One day we tried for hours and hours, but Cody was just done fighting and he passed on. How we mourned our sweet Cody.

We tried and tried to find another special-needs horse, with no luck, and Jeremiah was so lonely. Then in late 2003 our vet called to tell us her neighbor had two newborn calves who needed to be bottle fed because their mother died giving birth. We brought one of them home and named her Two Percent because that was her milk choice.

hinks she’s a horse! He immediately fell in love with Two Percent, and she quickly started serving as his “seeing eye cow”! She leads Jeremiah wherever he wants to go, and if Two Percent is led away from him, Jeremiah just panics.

Ironically, we discovered that Two Percent is a hermaphrodite. That means she can’t give milk and can’t have offspring. Hermaphrodite cows, in ranchers’ eyes, can’t “do anything in return” and are killed. If they could see Two Percent with Jeremiah, they would realize what a precious gift she is giving in return for just being loved! And Matt & I have been blessed with two of the greatest big pets anyone could have!"
Posted by Artsy Catsy at 9:24 PM

What wonderful people there are on the rescue farm!

I'm so glad that there was a happy ending for Jeremiah and Two Percent!

This was a wonderful story! Two Percent did have a purpose in life and I think that the Rescue Farm is a wonderful place.

Wow! What a cool story! Those are some amazing beans. Fanks for tellng us abowt them, we can't wate to heer more.

Oh, what a sad and cute and happy story! It makes me happy that there are such great people in the world!
Love Clover & Mom