Easter Carnival of the Cats #265 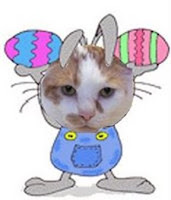 Okay, staff, everybody drop those eggs and let's roll out an eggstra special Easter edition of ...

First up ... humans, want to make us love you more – and make us smarter at the same time? These Big Cat Games suggested by Raising Whiskers will do the trick!

And, humans, sometimes you're not sure when we should go to the vet. This list of symptoms from GwenMart will help you understand when we’re having an emergency and when we can be treated at home.

There’s nothing we cats can’t do, including helping humans deal with telemarketers. Learn how at Puppies are Prozac ... 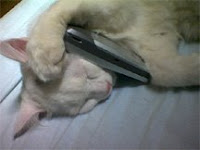 Then be sure to go meet Simba, the new cat-sittee bringing joy to the cat-sitter at Elms in the Yard.

Uh oh ... somebody spiked the cat food at The Poor Mouth!

It's a classic. In Gone With the Wind, you can gaze upon the dashing Mr. Rhett, a smooth operator at Mélange. But take care not to disturb Lady Willow, a diva in sweet repose.

Whoa! Sawyer has inflicted mass destruction on the new kitty condo at No Deep Thoughts.

Go take a look at Jax … His pic needs a caption at Texas Oasis ... 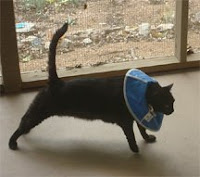 Then look at these kitty pictures of Audace and Ruse! They have a big birthday coming up next week at Momma Grace & Company.

And here’s another Birthday Boy - Packet at TacJammer is now two years old.

LOL! Stuff NOT On My Cat … you can find out what it is at Small & Big. (Hint: think Sphynx)

Luna is having a magnificently triangular week over at CatSynth.

On Wordless Wednesday it looks as if some choice words may have been spoken at Mind of Mog.

That same Wordless Wednesday theme is continued at iInfidel ...

... and again on Wordless Wednesday at iMOG the bLOG. It’s contagious!

It’s all Tweeting and Tummies at iMeowza.

Ivy’s humans have been to school, learning how to give her subQ fluids at StrangeRanger. Let’s all send Ivy some healing purrs.

Sunday is Funday, with a whole lotta pawtyin’ goin’ on at House of the (Mostly) Black Cats. And, everybody, let's wish their Mom Robyn well - she's having knee surgery tomorrow.

Rosie and Arthur are working hard at My Cats and Funny Stories, but they still took time out to send us all a wonderful Easter greeting ... 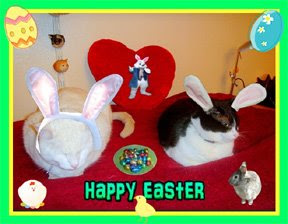 All of us at Artsy Catsy join them in wishing you the Happiest Easter ever!

Don't miss next Sunday's Carnival of the Cats, to be hosted at

Purrs for Pets in the Italian Earthquake

Rocky: We read the following news story today and it made us so sad. Lets all send our purrs and purrayers to the poor pets who are suffering after the earthquake in Italy last week. 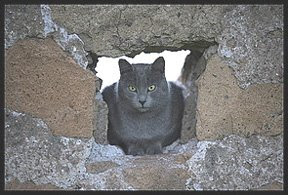 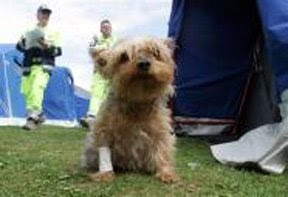 L'AQUILA, Italy (AP) — Help started to arrive Thursday for the more than 2,000 cats and dogs believed to have been left homeless by the earthquake in Italy. The national animal protection agency, ENPA, said seven tons of feed had been delivered to L'Aquila for both domestic and farm animals.

Many pets and farm animals are believed to have died in houses and barns that collapsed during the quake Monday. Those that survived are showing signs of trauma, rescue officials said.

When the earthquake hit, the first thing Maria Grazia Broberzi grabbed was her cat, Pallina. The cat now sits in a cage in the tent she shares with her owner in a camp on the outskirts of the devastated city of L'Aquila. She has refused to eat or drink since the quake. Every time Broberzi approaches, Pallina hisses and growls.

"She never did this before," Broberzi said. "Sometimes we argued over who got the couch, but she was always affectionate."

At least 2,000 cats and dogs are believed lost in L'Aquila alone, said Silvia Damiani, an animal rights official from Bracciano, north of Rome.

Fausto Cavalieri, a veterinary student with the Red Cross, was working at tent city outside L'Aquila, which houses 1,700 people, unloading dog and cat food from trucks. The supplies also included materials to build kennels and computer chip readers to identify animals in the effort to reunite them with their owners.

Iolanda and Sandrino Tarquini, a couple in their 70's living now in the camp, were mourning their dog, a 10-year-old black pincher named Pisolo who died Thursday morning.
The couple could not get Pisolo his medication because the vet's office was destroyed by the quake. And they believe the rain and chill in the tent city contributed to his death.

"He had a coat but he wasn't wearing it," said Sandrino, as his wife cried.

Agricultural officials are beginning to assess the loss of farm animals. Cavalieri said many sheep and other farm animals were abandoned and will probably starve if they cannot be reached. He said he had already seen 200 hundred sheep crushed in a collapsed stall.

The Italian farm association Coldiretti said it was too soon to give an assessment of how many animals had been lost.

Late Wednesday evening in L'Aquila, a Yorkshire terrier walked in circles, ignoring a policeman's offer of a sandwich.

"I see a lot of these poor dogs," said the officer, Carlo Chipa. "You can tell they are domestic pets because they are healthy and well-fed, but they look lost and frightened."
Posted by Artsy Catsy at 10:48 AM 15 comments:

Thursday 13: The Tail Tells All

Rocky: Hah, you silly humans thought we cats communicate only with our voices and whiskers. Well, listen and learn: our tails let us send messages to you without uttering a single meow, so it's best you learn right now what we're telling you ... 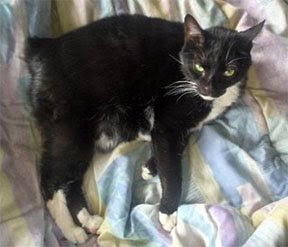 Rocky: Guess you'd better learn sign language, Oscar! Okay, now I gotta get my tail back to work planning the Easter edition of Carnival of the Cats, right here at Artsy Catsy this Sunday. Don't forget to submit your post HERE or email it to carnivalofthecats(at)gmail [dot] com
Posted by Artsy Catsy at 11:24 AM 40 comments:

Rocky: As an executive CEO cat, I think this is a purr-fect idea: The latest craze in Japan is Cat Cafés … 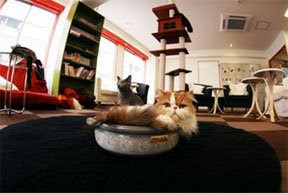 Yes, cat lovers are flocking to more than 40 Cat Cafés in Tokyo to pay 800 yen per hour to have coffee, tea or lunch with 20 or so resident cats. These Cat Cafés are so popular that reservations are needed on weekends, and in one of them the guest book has reached more than 18 volumes in less than a year! 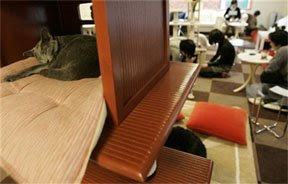 Okay, staff, let’s do it! Fracas, you put up the Artsy Catsy Café sign ... Lucy, jump into your waitress uniform ... Callie, get out the reservation book ... Mom, put on the coffee ... and I'll count the green papers!

How Bad is the Economy? 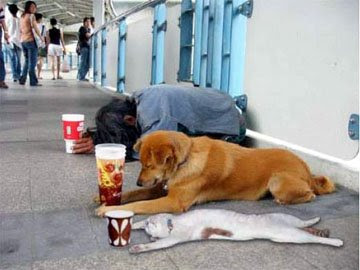 Rocky: We woke up in a panic this morning when we heard about the terrible earthquake in Italy ... 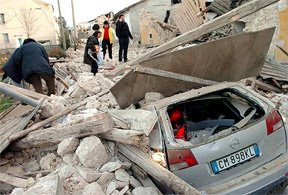 My mom's daughter Tiffany lives in Rome, and our friends Opus & Roscoe and their mom live in Emilia Romagna. And there are thousands of outdoor kitties everywhere in Italy.

Tiffany called us right away and thank goodness she's fine. The epicenter of the quake was in L'Aquila, 70 miles northeast of Rome. We haven't been able to reach Opus & Roscoe, but they live in northern Italy, much farther away from the epicenter, so we're hopeful they weren't affected. 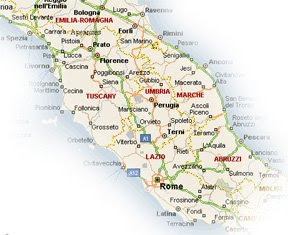 I've been through earthquakes here in Indiana, and they're so scary! So we're dedicating our day today to purring and purraying for all the beans and kitties in Italy who were affected by this terrible disaster. More quakes are expected in Italy and we're very worried.

You can read more about the earthquake at the links below:

Death toll in Italy quake on the rise

Rocky: Humans are so messy and disorganized - especially human artists. Mine are getting ready for an art fair this weekend to benefit our local Humane Society, and this is what they call "getting organized" ... 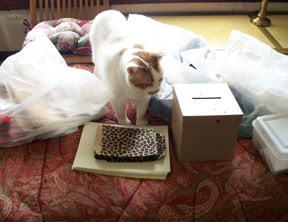 I am aghast! Not only do I have jump into the middle of their mess and straighten it out, I have to take time to remind them of the 13 ways we cats are more organized than humans:

1) We cats keep all our toys organized and out of sight in piles under furniture.

2) We cats keep our litter organized in a 50-foot radius outside our litter pan.

3) We cats organize our stray furs into neat clumps in the corners and only deposit individual hairs onto anything they will stick to.

5) We cats keep our kibble neatly distributed within a 10-foot radius outside our food bowls.

6) We cats try to help our humans stay organized by serving as paperweights for all their important papers.

7) We cats are even organized with our hairballs, yakking them up only on important documents and expensive rugs.

8) We cats are very organized with our screeching fights, conducting them only when the humans are very relaxed or sound asleep.

9) We cats are quite organized about time schedules, always waking our humans at least two hours before the time at which their alarm clocks are set.

10) We cats even organize our health, and only need to go to the vet when the humans don't have any money and, when they do, we make sure the bulk of it is spent on cat food and toys.

11) We cats cyber-organize our humans by walking on their keyboards and standing in front of their monitors.

12) We cats even organize our humans' sleeping habits by lying on top of them at night so they can't move.

13) We cats organize our humans' love lives by making them realize that no one in their lives is more important than we are!