Day of the Cat? 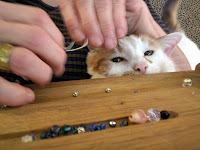 In Italy, yesterday was Giornata del Gatto, The Day of the Cat. That's a national holiday, so FredBaby and Holly Golightly, Artsy Catsy's European Division, were off work and out celebrating. Not so here in America.

Yes, while Fred and Holly were out dancing in the streets of Rome, imbibing fine wines and huge platters of pasta, generally living la dolce vita, I was forced to spend the entire day working 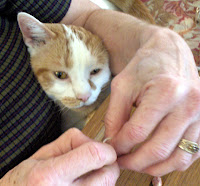 my paws to the bone, micromanaging the production of cat jewelry and bookmarks. To make matters worse, my American feline staff objected to having to work on an Italian holiday. Callie called in sick, Lucy had a hair appointment, and Fracas organized a mass mutiny, so the remaining staff spent the day picketing and chanting, "1-2-3-4, we don't want to work no more!" and "Growl, growl, hiss, hiss, Rocky's a filthy catpitalist!"
I tell you, being the CEO of Artsy Catsy is about as easy as herding cats!
P.S. You can learn more about Giornata Internazionale del Gatto at Cat-a-log. We thank them for their research and agree that since this is an international holiday, we need to promote it in America and elsewhere. Here's to International Day of the Cat (IDOC?) 2008!!
Posted by Artsy Catsy at 10:48 AM

Okay, new platform ideal: I will be instituting a Day of the Cat here in the US when I am president.... I think it should be EVERY DAY.

Poor Rocky. It looks like being the CEO means that you have to work the hardest of all the cats. I hope your beans appreciate all you do for them.

I don't mind, Karen; I'm a workaholicat! I insist on being in the middle of everything that goes on around here. And my humans let me, plus I get to stretch out next to my mom in bed after a hard day's work and knead her neck while she kneads my head! I love the corporate life!

Curiously, I hadn't heard of this in Spain either, which surprised me if it's as close as Italy, so I thought I'd do a bit of reasearch. This definitely needs promotion.

What a great holiday! The Italians are very smart. It should definitely be a holiday the world over. :)

Thank you so much for the link. I'll try to keep an eye on this for any further news.

we're all for it, but it shouldn't just be a day off work - it should be a day where cats are worshipped and given everything they want...like every day should be.

But Monday 2/19 is a federal holiday in America! You should not have to work on that day! (same goes fer yer beans - it's the law) - um, well, unless you are working on our bookmarks...then step to it! (hehehe - kidding)

Well, as long as you're enjoying the work, Rocky, I guess it's okay! (Though I'd rather eat and play.)

Lux, I've got the best of both worlds, 'cause I play with my work - especially when it involves string and beads ... or paint. Sometimes I like to lay in the paint and turn green or purple!

Rocky! We gots our bookmark an it tastes wonnerful!
... I mean, it looks wonnerful. Mom used it in We Are the Kitties. Gramma Henrietta is thrilled wif hers, too. Our compliments to yur staff. You's a good leader.