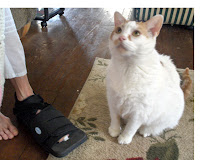 I, Rocky, publicly ask for forgiveness. We had some serious toes woes this weekend, and the buck stops here. I accept the blame for dislocating a toe belonging to our human artist Suzanne.

It all started when my mom Sharolyn accidentally stepped on Callie's toes, and Callie screeched out one of her banshee screams, making my pupils dilate and my tail puff up. My only recourse was to jump on Callie, wheretofore we rolled rolled around on the floor screeching like something out of a Roadrunner cartoon, Fracas screeching on the sidelines. 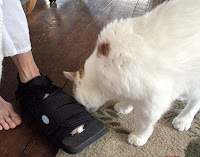 Sharolyn screeched at us to stop it, causing her sister Suzanne to race down the stairs screeching What's going on down there? Whole lotta screechin' goin' on! Then Callie ran on the other side of a door, and when I chased after her, Suzanne tried to close the door while blocking me with her foot, and BAM! The door hit her toe.

So Suzanne fell on the floor screeching and when she took off her shoe, one of her toes was pointing completely backwards! (This is heresay, because when I tried to look at it they both screeched at me.) Then Sharolyn dragged Suzanne to the human emergency v.e.t. and they were gone for six hours! It took that long to pull and twist Suzanne's toe back into position, which involved fainting, yakking and clutching at the doctor, who screeched, Hey, don't grab the guy with the needle! ... so I don't think she enjoyed it very much.

Now Suzanne is wearing a big funny shoe that requires our sniffing. She doesn't seem as upset with me now, but maybe that's because of all the human nip they gave her for pain. So I confess my part in all this. But I think Callie should share the blame. If she hadn't started this screech-a-thon, Suzanne's toe might not look like something out of Frankenstein's lab!
Posted by Artsy Catsy at 1:27 PM

Oh no! Poor Suzanne! I hope her toe heals up soon! Sending lots of healing purrs her way.

I don't think you can be blamed Rocky, it sounds like it was just an accident.

Oh Dear, somecat is going to owe someone some serious snuggles!

We hope that Suzanne is better soon. What a story!!! We think that it was all accidental so hopefully everyone is happy with each other again.

Yikes, that sounds like a very scary event! I hope Suzanne's toe gets better soon. I am sure she is not upset at you, but it was very manly of you to accept the blame and ask for forgiveness.

Healing purrs to Suzanne. Be careful and don't shut the door on toes, human or kittie.

Ow that sounds painful. I hope you get better soon.

Rocky looks sooo contrite. I hope Suzanne has forgiven him.

It is very big man-cat of you to accept responsibility Rocky. I'm sure Callie didn't start screeching to cause trouble. I screech whenever someone steps on my toes!

I've never seen a dislocated toe but my Daddy had one a long time ago. He says he really feels for Suzanne. We hope her toe heals very fast.

I hope your person's toe gets better soon. I'm glad she's not mad at you any more. It sounds like it was all a big mess and not entirely your fault.

Hey, it's not like you ripped her toe clean off her foot, just for kicks. She should be thanking you, because now she gets all the fun people-nip ;)

Poor Suzanne! Sounds like the kind of excitement all of you could have done without! I think she will forgive you Rocky, you didn't mean to hurt her!
Tara

Yikes! Hard to even read about. Sounds painful. I hear you folks donated to an auction to help out my rescue. THANK YOU! The strays of Oregon's mid valley say thank you, too. Well, they would if they could.

Oh Rocky, we are sure Suzanne forgives you. Toes are sensitive! Ouchie! Purrs

Oh my good lord! I am WAY impressed - you are extremely enthusiastic in training your human slaves. This little 'accident' really will kick your human into shape. What did they do to annoy you so much? Were they not feeding you the right stuff? Giving you enough bed space? Oooh please tell me I can't wait to hear.

Rocky,
we are sure she will forgive you! Take one look at your face and she'll melt!!

oh my goodness, my mommy said hurt feet are terrible cause beans need them so much. I'm sure you're forgiving dear Rocky cause you said how sorry you are. Take good care of Suzanne while she heals! If you lay right on her belly, she has to stay on the couch resting....

Oh no, I am so sorry to hear about the toes-woes weekend and the screeth-a-thon. Lot's of purrs, snuggles, and headbutts might help the injured.

Yikes, sounds so painful. I cringed just reading about it. I hope it heals quickly. And, Rocky, try not to feel so bad, it was an accident.

actually... it seems to me that it is the door's fault.

I cant understand how you should take the blame... you were just being your own kitty self.

OH! and I hope sharolynn's gtoe gets better. My mommie says ice and elevation!! (she is an old ortho RN)

Oh my goodness, that made my paws sweat!

What an awful chain of events! I hope Suzanne's toe gets all better! Screeching never leads to a good end!

Mommy's toes curled up and tried to hide when she read yore post wif me. We hopes your human's toe heals up reel fast. We'll send purrs for it to!
Sanjee, Boni, Mini, Pepi and Gree

Rocky, Callie, you are BOTH now official members of the Underfoot clan of cats. Shaggy, from Scooby, Shaggy and Scout fame, is also a member as his woman broke a toe tripping over him. I've never damaged my humans that way, but they appreciate my intention to see everyone off at the top of the stairs AND greet them at the bottom. What happens in between... is our little secrit.