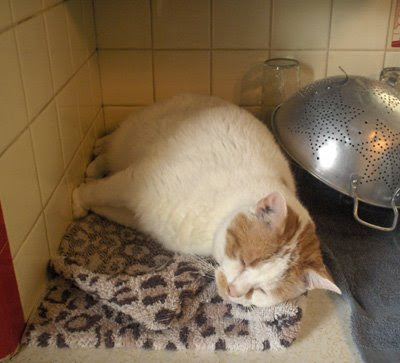 Trust me ... they'll soon understand that a few furs in their clean dishes is much less trouble than shooing you off the kitchen counter 24/7!
Posted by Artsy Catsy at 2:47 PM

So true. You have really flamboozled your human, Rocky. My cats only get white towels.

Very True. Gizzy did that. Mom put a SPECIAL towel on the counter for him. He used to watch her cook her dinner.

We try that. Sometimes it works, sometimes it doesn't. Doesn't stop us from doing it though.

I try so hard but the male refuses to listen. You are lucky Rocky.

Persistance is why we are allowed to stroll across, sit on and sleep on our kitchen table...of course we've compromised and don't do it when we have company.

Everything tastes better with cat hair in it.

ohh Rocky, you're so awesome catnap in that kitchen;)

"Wow" Rocky you have your humans trained well.My mom would never let me do this :)

Way to go Rocky. We'll work on that one here.
Purrrrrrrs,
your bud Pepi

Bendrix is so impressed he is wiping a tear from his eye. you have trained your beans so well. it is a beautiful thing.

Rocky, I like the way you think. You are a smart fellow. No wonder Bendrix is so impressed.
This is one of the best posts I have ever read in my life. And even though I am only 8 months old, I know an important statement when I read it.
Bravo, Rocky!
~~~ Faith Boomerang

We wanted to stop by and say thank you for celebrating with us this weekend. Sorry we couldn't stop by sooner, but we've been having problems with our internet connection...Anyway, we just wanted to express our thanks!

We totally agree Rocky ~ our human has given up trying to stop us from climbing curtains ;)
Love the way you are just pushing against the tiles to stretch your splendid body :)

Hi guys! We thought Oscar might be intrested in the new group for short tailed kitties. Gizmo started it at

Where are you all?? WE miss you!

hey, Bendrix and I think you should take one of those new kittens that showed up at Grr, Midnight and Cocoa's place. Then we can sing "Sixteen Kitties, Make a lovely siiiiight" You know, like that sixteen candles song.

Beans really are stubborn aren't they? If they would just learn the first time it would save everyone lots of trouble!

You've got the purrfect attitude!

And with four of us Ballicai, she finds 'em effurywhere!

Who on earth has the cheek to dictate to cats????

This is a perfect example of what makes cats special pets. Being someone's best friend does not mean always doing what they want!

Cats should go wherever they want - except Evil Ovens, evil loos, etc. ;
:

You is clever Rocky! I must tries that too!