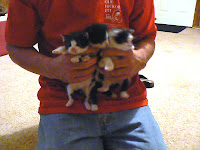 Our sister Vickie in Sellersburg, Indiana rescued these 3 adorable kittens and they need homes. They were found abandoned in a wood pile behind Old Hickory Pit BBQ in Louisville, KY. There has been no sign of their mother. 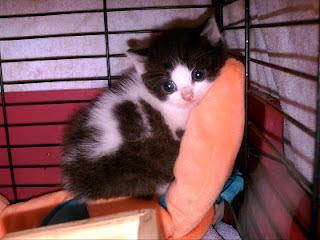 And there is another feral mother with a litter of 7 even smaller kittens that she's trying to capture from the same location. The kittens' eyes are not yet open. The mother has obviously never had contact with people, and her tail is gone, probably burned from the fire pits behind the restaurant. A number of cats have died at this location because cats climb into the fire pits to get warm, but then they often can't get back out. They also get killed or injured when the wood is chopped. Metro Louisville Rescue will pick up the kittens, but they said they would have to euthanize them immediately due to the large number of kittens they already have. 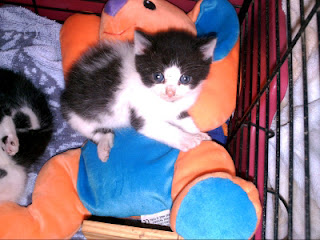 These three are fat little sweeties, so their mom did take good care of them. Vickie is trying to capture both of the mom cats so she can have them spayed, even if she has to return them to where she found them. 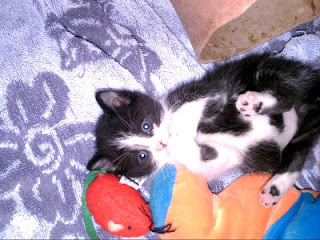 But these beautiful babies, and the ones yet to be rescued, need furever homes! If anyone in the cat blogosphere could adopt them, or if you know of a no-kill shelter or other organization in the Louisville area that would take them and their mother cats without euthanizing them, PLEASE let us know! Vickie already has 11 rescued cats and can't possibly keep these 3 kittens or the 7 yet to be rescued, or their mothers, no matter how much she'd like to!
~~ Sharolyn & Suzanne
Posted by Artsy Catsy at 10:30 AM

Have you contacted Best Friends to see if they know of a shelter in the area? Often they have a good list of local shelters and may be able to help put you in contact with one there.

Well put the word out! Good luck. You are such nice beans to take them in for a bit. Crossing our paws and trying to find them a home.

Oh, they's so cute! But Bonnie an my dad would pack up an LEAF if Mom brot in anofur cat.

Tummy and toe tickles fur the tuxie in the last pictor specially.

I am keeping all my claws crossed and my tail knotted in the hope these cuties get loving homes. I keep trying to convince the humans to get another cat but they're a bit nervous that I might not be friendly to them (I am ashamed to say that I used to beat up our other cat and make her very miserable). FAZ

I hope they can find homes, they sure are cute.

Oh, those poor little kittens! They look adorable. So sweet. How wonderful that your sister rescued them. :) I hope she can capture the other 7 and the two moms to be spayed. I hope they all find wonderful Forever Homes.

Mo and The Purries said...

Our thoughts & prayers go out to these cutie patooties.

It's hard to believe that a "shelter" would automatically euthanize kittens!

oooh look at the lickles!!! I would so come over there right now and adopt them, I would, I would.

Wait, what am i saying? I hate younger siblings! I hope they find a loving home!

oh my goodness - they're totally adorable! what a wonderful thing you're all doing!

they are adorable. i wish i could adopt one but hubby said two is my limit. :( i would have at least four if i had my way or at least be a foster mom. i will be praying for these cuties and the other 7 little ones and the mommys. if i hear of anyone interested i will send them your way.

Oh my heart aches for all the homeless kitties...it really and truly does. I wish I could take them all in. Those adorable chubby little bodies -- oh and tuxedoes to boot. Please please please find them their furrever homes.

Bless you sister for taking them and doing what she is to find them a good and safe home....

We hope they find good homes too.
They are soooo cute!!!

If it's a slow news day, local TV can be your friend. Call them and see if they might be interested in a "human interest story" about these kittens and how the BBQ place is where they hang out - if you can get them on TV they will fly our the door and get names like "Smokey and Saucy" After all, it is kitten season and awareness needs to be raised about the squillion kitties who need homes!

Excellent idea, Parker! I've passed it on to my sister.

Oh, how great that everyone has such wonderful ideas. I hope they get a home quickly.

Oh my goodness these kittens are so adorable. If anyone else is like me they just can't get enough cuteness out of the world. there is something i envy in the playful cuddliness of a kitten. one of the cutest pictures i saw was of a bunch of kittens in a basket, there were like 11 , it was at www.cutepetopia.com if you want to check it out!

Oh, drat, drat, drat! I am too far away and can't have cats anyway. They are so adorable that I would take them in a minute if I could. I hope they all find forever homes.

Well, I write to you from our ZOO!
We have gotten all the kitties on a schedule..theirs..not ours! The 3 older kittens are happy, playful, eating great and are as sweet as can be! The 5 little ones are eating a lot and are growing! They are very active and crawl all over the place. The all love to cuddle and fall asleep on us!
We are hoping to get help with buying formula for all of them until they are weaned and ready to find their forever homes!
Thanks for all the advice and tips.

We will keep you updated!
Vickie

Hi,
It's the ZOO keeper again...Vickie!
All 8 kittens are doing great...the three bigger ones are starting to eat dry cat food that we have moistened for them. They are the sweetest little babies. They love to play and romp and climb and they love the little babies too! I took some pictures today of the male (Duncan, my daughter has named him), washing and sleeping with the babies after they ate. The little ones are growing and doing well. Four of them have their eyes open and they all love to crawl around. We did get some help from the Shamrock Foundation..they gave us 5lbs of formula and also a live trap to catch the ferel parents at the restaurant. Adam caught the little ones mommy today and took her to a vet who will fix her and then we can let her back out. There are several more adults that hang out at the restaurant so we'll hopefully be able to get them all neutered/spayed. This might help end that on-going cat farm!
Thanks again,
Vickie

I would love to adopt it :)
Thanx