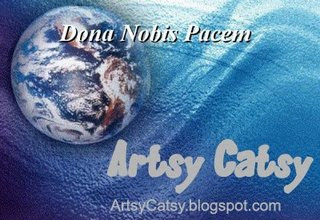 "If there were to be a universal sound depicting peace, I would surely vote for the purr." ~~ Barbara Diamond

"There are people who reshape the world by force or argument, but the cat just lies there, dozing, and the world quietly reshapes itself ..." ~~ Ivy Dodd

"The cat seldom interferes with other peoples' rights. His intelligence keeps him from doing many of the fool things that complicate life." ~~ Carl van Vechten

"If we treated everyone we meet with the same affection we bestow upon our favorite cat, they, too, would purr." ~~ Martin Buxbaum

"Maybe in the future we should ask presidential candidates where they stand on cats. Better still, we should demand to see the cats these candidates say they have raised, just to make sure we are not having the fur pulled over our eyes." ~~ Gilbert Gude

Puuuuuuuurrrrrssssssss I'm so sorry we missed your mommy's surprise party. We were sure our cable would be fixed by the time my beans got home from work(that is how we visited yesterday), but they didn't do it until this morning.
Bendrix and I were with you in spirit! It looks like we missed a wonderful time. I wish my spirit could have tried some of Marilyn's tuna puffs. mmmmm Happy Belated Surprise Party to your mommy!!!!!

Wonderful collection of quotes! Peace to all of you at Artsy Catsy. I am purring for peace.

Those are wonderful quotes, Rocky! Here's my purr for peace:

Peace to all of you our wonderful friends!

Hi everyone, thanks for visiting my blog. Are there really 15 of you in this place? Let me just check again. Lovely quotes and I agree with all of them. If humans would just learn from us kitties!

Happy (belated) birthday to your mommy.

Peace to all in your home.
Peace to the world!!
Peace

Your staffing situation is very complicated and I wholeheartedly admire your organizational skills. You should give SS some pointers - she only has me and she is in a mess.

what a great globe and what superduper quotes! Happy Peace Day! We Ballicai are purrin fur peace.

I love your globe, and those quotes are fabulous! Happy Peace Day to you all!

Purring for Peace here too!

Happee belated birfday to the mom!

Happy late birthday wishes to your Mom! I'm sorry we missed your surprise party. It must have been fun.

Peace to you all!!

Peace and purrs to our friends at Artsy Catsy, from CatSynth (Amar and Luna).

Hi new kitty friends!
Thanks for stopping by my blog to say hi!
I like your peace globe. :)
Love Clover xo

Those are totally great quotes!

Peace to you and yours.

Love the globe and the post. Thank you for participating. Love to see the cat participation like this. It is wonderful.