Rocky: I'm in need of professional advice. My Vice President Fracas has an odd habit that is becoming quite worrisome as well as annoying. He grinds his teeth, constantly, against both inanimate and animate objects! Here you can see him grinding his teeth against banana stems: 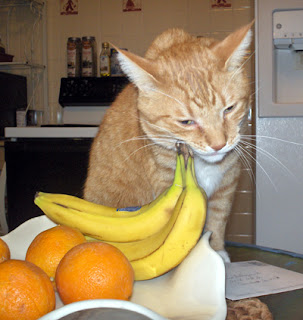 But it doesn't stop with banana stems. He's been found grinding his teeth against table legs, boxes, chair backs, cabinet handles, faucets ... even against human fingers. If a human just touches the corner of his mouth, he immediately starts grinding!

Mind you, he doesn't actually put the object IN his mouth -- he just puts the corner of his mouth against the object and grinds away, getting a faraway expression in his eyes while his jaws make a loud gruesome gnawing sound!

So what do you think? I've checked his teeth, and they're fine. Is it job stress? Is he obsessive-compulsive? Does he have temporomandibular joint disorder? Is he a neuroticat? Or just weird? Is it a gingercat thing? (I hope not, because I have ginger spots!) I really need answers because this abnormal behavior has earned him the nickname "Wacky Fracky" which is quite embarrassing to my catporation!
Posted by Artsy Catsy at 12:00 AM

Gurreat picture! I dunno if that's weird or not...but I enjoy doing that too!

Our ginger cat did that--mostly against the Woman's elbow and then sometimes he would give her a little nip...

I believe it is a ginger cat thing--but perhaps you need to be a complete ginger striped cat?

By the way, the ornament is awesome--except that it doesn't feature me... I hear the woman didn't give you a Cheysuli photo though... Sigh. I am SO abused.

That is pretty strange, sounds like a grind fetish to me...

That is a bit strange. None of us grind our teeth here. At least none of us cats... If it is a new behavior, maybe Fracas needs a teeth check up.

Wow, that's very interesting! Do cats get TMJ disorder? Fracas is obviously too old to be teething. Very puzzling! Maybe it is a ginger cat thing.

I hate to say it, but I think Fracas needs his teeths checked!

As you know, you have a scent gland on the side of your face there that you use to sign things with your scent. Well, sometimes mind gets really itchy and I'll rub my face against the lampshade in the bedroom trying to scratch it. My bean usually notices when I do this and then grabs me and gives that side of my face and jaw and really good long skritch, and that takes care of it.

That may Fracas problem. I think maybe the glads get a little blocked up, although I've never heard of vet diagnosing that. So maybe you can get one of the humans to give him a good skritch on the side of the face once a week or so and that will take care of it.

Otherwise I's say he's feeling insecure and thinks he has to mark everything as his. Sometimes that happens in a multi-cat household.

Better he marks things that way than the other way!

Tiki and I both do this, but I even do this on the woofie's face! I rub so hard that his lip pulls back and you can hear our teeth clicking together. He doesn't seem to care for it much, but I like it!

Maybe it's a tabby thing? -Riley

Do you see what I have to put up with? -Kesey

So far none of us have done the teeth grinding thing in front of Mom, but one of the previous cats did. Clyde was a grey tabby who specialized in rubbing the corner of his mouth and gnawing on cardboard, card stock, etc. Mom never figured out why Clyde did it, and he did it all 15 years that she knew him. So maybe it is a tabby thing!

Poor Fracas, being a VP must be stressful. Speedy does this to a certain degree and his vet seems to think it's comforting to him. Dr. B thinks he does it because he has two sisters that he subordinates himself to. Kind of lame if yoo ask us. Maybe his gums itch.

Hmmm we don't know why he's doing it, but are you sure his teefs are ok? I used to chew on mum's fingers if she put them near the side of my mouf (silly fing to do mum)but when she took me to the
V E T to be torchered, and he ripped my teefs out, I nefurr did it again.
Eric

Sounds like TMJ - our Mommy has it too. She takes muscle laxers for it and then goes to sleep. That would work if you ever feel the need to knock Fracas out so you can get some peace and quiet!

Hmm, that is very unusual. When I was a baby, I would constantly grind my back molars together. It made a terrible sound that my Mommie hated. But I stopped doing it after all my big teeths came in. Is this something new for Fracas, or has he always done this? If it's new, maybe he should have his teeth and mouth checked. Just to be safe.

Thank you all for your advice! I can see Fracas is not entirely alone in this behavior.

To answer some of your questions, he's four years old now and has done this since before he was 1 year old. We've had his teeth checked and they're fine.

Diamond, you may be onto something. Fracas has trouble sometimes with a blocked tear duct in his right eye ... we'll watch him and see if he does the grinding thing only on the right side. Maybe it's related to the tear duct, or maybe his scent glands on that side are also blocked.

Because he's a cat!
Well, that's Garfield's answer to every question. I like Diamond's itchy brain theory!

Maybe it is a ginger thing. Mommy used to have a ginger kitty named Charlie that would do that all of the time, and now Ivy (who has lots of ginger on her) does the same thing.

I do that sometimes too and my teeth are fine too. I think we just like throwing off the beans.
Mommy will watch me in case Diamond is right and I'm not just being weird.

Until then, I think Fracis and I need blocks of cruchies to rub on!

Dunno why he does that - we fink Diamond's theory may be correct - hope you find the answer soon!

I hope you can get to the bottom of that grinding problem. My first guess would be teeth or gum issues but you said that was fine. Very interesting.

Hmm, my kitten ginger tabby doesn't do that, yet. Nor do any of the four rest of us. Please let us know if you find out a good anwser.

Mom says she's had cats that did that before - she's not sure why, though.

I have tagged you for the "7 Weird or Interesting Things about You" meme! Stop by our blog to learn the details. We would love to learn more about you, so whomever or all of the Artsy Catsy staff that would like to participate would be fun!

BANANAS... I'm sorry, what were you saying... BANANANANANANANANNANAS! ~Fiona Bun

hahaha thats hilarious! Randomness - definitely a ginger cat thing - although it wouldn't surprise me if Baby Mao starts doing that, he is a really odd cat.

Too funny - grind away! x

My cat does the same grinding thing and when I told the vet, she found it to be an unusual behavior. Hobart is a 3 1/2 year old male tuxedo cat and he can just stare into space and grind away. When I put my finger on the side of his mouth he will touch it wiht the inside of his mouth while he grinds and grinds. If I pet him or somehow make physical contact with him, he will usually stop, but no amount of nice kitty talk or even his name will take him out of this little trance he seems to slip into. I think he is nervous, or stressed about the outside. Because he has been to the vet for FUTD and checked regularly, with teeth discussed, I have concluded that it is behavioral. Cute, but very odd.