Rocky: Our house is SO full of kitties. Besides my current Artsy Catsy staff, the spirits of all the kitties who came before are watching over my mom, and over us kitties, too. You know how sometimes we kitties stare at, or get startled by, invisible things? Well, those things are Guardian CatAngels, and they're not invisible to us!

Two of our very special Guardian CatAngels are Millard and Gizmo ... 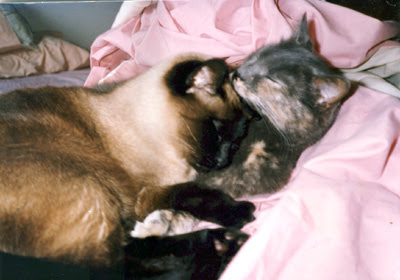 Millard, our meezer, had to be helped to the Rainbow Bridge in 1999 when her kidneys failed, after living with my mom for almost 23 years. Gizmo developed cancer after Millard passed and my mom helped her join Millard exactly two months later, at age 19.

Millard was one of a pair of identical sibling meezer girls who adopted my mom at a pet store when they were six weeks old. My beansister was a little girl at the time, and the silly thing named the two meezer sisters Millard and Fillmore! Sadly, Fillmore went to the Bridge when she was just a young girl.

Millard was a unique and brilliant kitty -- she loved to ride in the car and would take long trips with my mom to visit my beansister in college, where she would serve as the temporary dorm mascot. But my mom had to keep an eye on her because she would sneak into the neighbor's car and go to work with her! Millard would take walks with my mom and trot along beside her like a woofie. And she even taught herself to use the human litterbox!

Gizmo was a formerly feral my mom rescued. She was always just a little bit feral and didn't like other kitties much, but she adored Millard and they were inseparable. My mom says she knew that when Millard went to the Bridge, Gizmo would be lonely and would find a way to join her.

Even though I'm jealous of other kitties getting my mom's attention, I don't mind at all that she has lots of room in her heart and in our home for our Guardian CatAngels Millard and Gizmo.
Posted by Artsy Catsy at 9:35 AM

Oh that was such a sweet story about Millard and Gizmo! It made Mommy's eyes leak a little at the end.

Oh Rocky, what and amazing picture of Millard & Gizmo!! Thank you for sharing their story. We just loved it!

Ralphie, the one that came before, AND grampa Norton and gramma Trixie are all in the dungeon room and I HAS to go there ALL the time to talk to them. I go down there and then mommy hears me going "MAO MAO MAO" and asks me what's wrong, but I'm just talking to them. she cannot see them. isn't that weird?

Thank you for sharing the story of Millard and Gizmo, Rocky! Millard sure lived a long life! My mom also had a Meezer before us, named Whiskers, and he died of kidney failure just a month shy of his 20th birthday. We know Whiskers still holds a very special place in our mom's heart.

Millard and Gizmo seem like they were very special kitties. 23 years is a long, long life! We have some Guardian CatAngels, too. Their names are Haiku, Slinky and Cricket.

What a wonderful story! Millard and Gizmo both sound like special kitties. You are lucky to have such great Guardian CatAngels!

What a nice story and tribute to dear old friends. they lived a a good long life and are together still. Our guardian CatAngel is Kitty (her name was officially Midnight, but she never liked it and only came to "Kitty". She passed on March 7,2000 of congenital heart failure at 17. We adopted Jackie a couple weeks later from the Humane Society so that Abby (then 2) would have a companion - she missed Kitty so much as she had always been there from the time we brought Abby home as a puppy.
Chris

What a wonderful story! Both Millard and Gizmo look as though they are lovely kitty angels!

You are very lucky to have a Meezer Guardian Cat Angel! While we loved our Simone Meezer, our best guardian angel was our big fat orange cat Iggy, who brought us Gemini. The Woman also says we have a guardian cat angel who looks like you Rocky!

What a great story! They were two gorgeous kitties.

That wuz a lovely story about your guardian angel cats. We haf lots of guardian angelcats here too. They live in the rose garden, but sometimes they come indoors cuz we see them.Mum has heard them sumtimes walking around where the food dishes are cuz there are creaky floorboards there. She knows it's them cuz we are in bed wiv the Beans, and it's all quiet when it happens. She is happy that they come to watch over us.

Awww, that was such a nice story about Millard and Gizmo My mommie has her guardian woofie, Ted.

Rocky thank you for sharing that with us. Millard and Gizmo sound like wonderful CatAngels, we have one, too. Her name is Ariel, but Mom always called her Miss Kitty! Mom wants to thank your Mom about one of the comments she left for the Lady with the dog with allergies. I am scratching all my fur off in places and the Vet seems to think it's food allergies. He gave me a shot of cortisone, but it's not helping much. She is going to try the fish oil capsules.
Thanks,
Mr. Tigger

Rocky, thanks so much for sharing about Millard and Gizmo - they look like they were very happy together. They must be great kitty angels watching over you in Indiana and your beansister in Italy.

Millard and Gizmo must have been furry speshul frends. Mom doesn't know it but we've met Punkin when she comes here to check on mom and Zippy.

we hafs cat angels at ars house too! sometimes they wakes her up at night when she sleepin. daddy gets all cramped up at night cuz he says a cat wuz sleepin wifs hims an mommees will tell him the cats wuz sleepin on hers all night. mommees knows it is her babies coming to snuggle wif thems on the big bed.

Wow, those two had long lives. Your mom really had to miss them after so many years.

Wow! 19 and TWENTY THREE? that is the oldest kitty I have ever heard of. That makes Willie and Bianca sound like youngsters at 16!