Rocky: Since we're such political animals, and since our headquarters have been invaded by that Milky thing, Fracas and I decided to get away for awhile and join the Mosaic Cats at the Democratic National Convention.


Fracas has joined Michelle Obama's personal security detail, keeping a serious eye on the Convention crowd to make sure he's the only fracas in the building ... 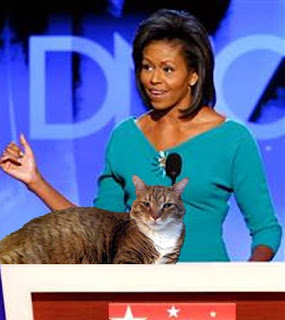 I'll be appearing at the Convention Thursday. In the meantime, I'm sticking like glue to Barack Obama on the campaign trail ... 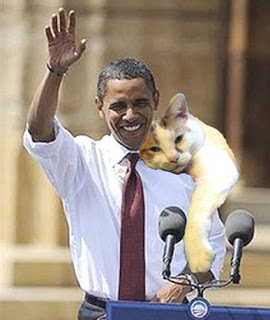 Senator Obama is kindly giving me a big shoulder to cry on about being one of millions of Americans losing their homes to bad mortgages and to Milky things. So he's definitely got my vote!

Poor Rocky. I'm sorry you feel like your home has been taken over.

How is the invader doing, by the way?

Its clear that Barack has a soft spot for you. I wonder what he would think of Mr Milky ?

I am sure Obama appreciates your support!

Obama is lucky to have such kool kitties supporting him!

Obama must be a little man or you has gotten very big!!
Iz a very neat photo! :)

Rocky, Rocky, This is the best picture ever! Mr. Obama is teh luckiest man to have you keeping watch over him :-)

Your People have mad Photoshop skillz, too!

You aren't going to vote for Chey and me?

Maybe Mr Milky can be a white house cat? The critical question is, are they good petters?

You and Obama look so cute together! :)

Good to hear you have something to shorten the time you are without your livingroom. Glad to hear Milky is doing well enough to speed up the surgery. You've been so patient with him - just a little longer and it will all be worth it and you'll have a new friend!

What I find the most amusing, is the cat named fracas. Obviously it's a smart cat. ;-)