Mr. Milky: Yay!! I got released from the vet hospital this morning and I'm back home at Artsy Catsy ... I'm so happy I can hardly sit still long enough for the flashy thing! 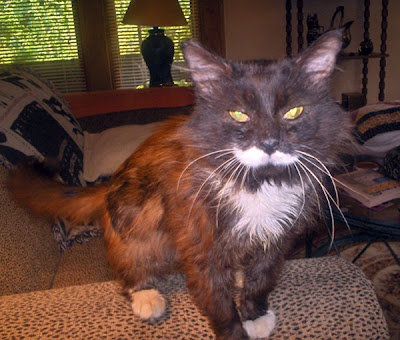 I can walk just fine after my stroke and I can control my eye movements, and my Artsy Catsy mom says I act better than I did before the stroke! I'm running around and talking and just can't get enough affection ... 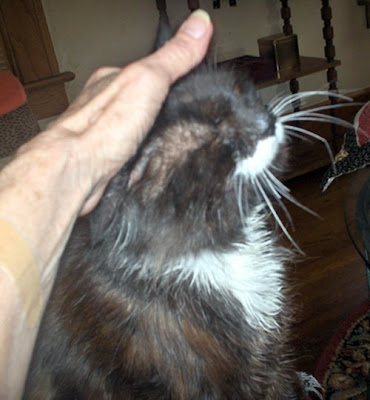 I'll tell you more later, but right now I have to give squillions of headbutts and get squillions of scritches ... because there's no place like home!!! And also because today was supposed to be my hoohaectomy day, but now I get to wait at least 10 more days before they start messing with my hoohahs ... double yay! Ten more days to show Rocky & Fracas who's the REAL mancat around here!
Posted by Artsy Catsy at 11:30 AM

oh Milky,we are so very happy you are ok. you're giving artsy catsy mom lots of reasons to keep you there at artsy catsy, aren't you!!

Yay Mr Milky...Sadie sez to be careful showing da others who's manly or after yer hoohaectomy dey just might gang up on yoo. Besides, yoo will feel better wifout da hoohas.

Hey Mr Milky it's good to see you back, we were very worried about you. Now you take it easy and build up your strength for the hoohaectomy. You sure look happy!

Welcome home Mr. Milky - I am so glad that you are OK!

Mr. Milky, we have tears of joy in our eyes that you are home and better!!!

Welcome back Mr. Milky! Good to see you looking so happy!

Judy, The Divine Ms. P, The Princess Cinza and Frank

Welcome home Mr Milky. You look great ! Now take it easy and soak up all that love. I love you.

doin the happy dance!!!! we are so glad you're home and doing well.

Mr. Milky, we are happy you are home again! We were so worried about you! Hope you get all the head scritches you want!

pee ess. you're happy that your hoohahs aren't being messed with yet, but we're sure the rest of the Artsy Catsy group don't feel the same way!

I am so happy to send a cyber head rub to you little man. I wondered if maybe you had a seizure and not s stroke. doesn't matter as long as you feel better. Tell the mom you want some stinky stuff. Mine are crying for some and I have to go to the store again.

Love your smile on what I thought was Monday. I lost a day!

Great news! So nice to see you home, headbutting and getting scritches. Nothing like home to make you feel better.

So happy to see Mr. Milky home and looking so happy and content.

We are so glad you are feeling better!! Purrs for your continued recovery.

Yayyy!! We are so, so happy that you are back home!!! Also glad you don't have to go back to the VET for a while!
Enjoy all that loving!!
~ The Bunch

I was so worried about you, Mr. Milky, and I'm so happy you're back home now! Enjoy your scritches!

Welcome back home Mr. Milky. We are soooo happy for you.

So happy you're well! Make sure you mind your manners Milky or you wont be making any cat friends at artsy catsy.

You gots ta stop givin them artsy-catsy hoomins such frights or they'll have to check into Dr. Shew's hozpittal, and den who will gives you scritchies and gud fud?

That is such beautiful , wonderful news!! I am sure I won't get in trouble no matter what I do today coz momma is smiling sooo big inside and out!! I can seez it!!
Welcome home Mr Milky you little darling!!! :)

Yay for Mr. Milky!! We're so glad that you are home and with no ill effects from your stroke! Yay!!!

Yay you are back home. Say, you aren't pulling these sickness things to keep delaying your hooha's getting snipped, are you?

We're so glad you are home and doing so well! Enjoy the headbonks and scrinches and snuggles!

Doood, I am really stoked you're okay. I mean, it was good that you had a great home for even a little while, but even better than you're gonna get to hang around to learn to take it for granted.

We are so happy you are feeling better and that you are back home! Get some rest!

We are sooo happy that you are home & doing so well!! Tell your mom to give you some scritches from us!

I am so glad that you are home and feeling better, Mr. Milky. I think you should be careful about flaunting your hoo-hahs around. You definitely don't want all the other cats mad at you.

Dearest little Mr Milky! WELCOME HOME BUDDY....I am ever so happy to have purrrred for you while you were so sick. It worked a miracle happened and you are home again and recovered. The Lord is so good to us kitties isn't he?
Love from Miss Peachy

Yay! Hooray! We're so glad you're better and that you're home, too! Don't worry, Mr. Mily. You don't need you hoo has.

PTL!! what a furry miracul!! youz hads us all scairt mr. milky!
why u go do dat fur?