Mr. Milky: Yes, it's hoohah-less me, and I'm finally back at Artsy Catsy! Tell you what, getting rid of those hoo-hahs and getting all my vaccinations has made me feel feisty! First thing I did was try to attack Rocky then hiss at the Artsy Catsy beans when they told me to stop. So now I've got the living room all to myself again, and I'm just sitting here thinking about what I can get into ... 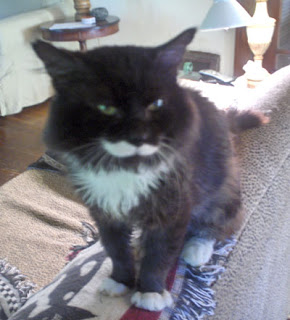 I know! I'll shred the back of the couch! 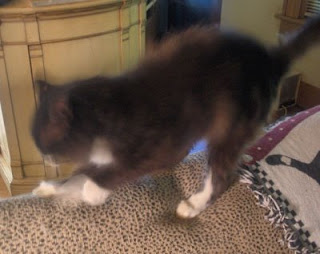 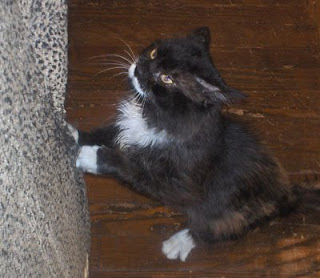 I guess I'd better rest now, because soon I have the important job of selecting the winner of Deb & ML's raffle for me. Thank you all so much for helping me, because due to my recent stroke and foot surgeries, Dr. Shew had to run extra tests before my hoohaectomy to make sure an anesthetic wouldn't hurt me. Okay, naptime!

Rocky: I'm thoroughly disgusted. We've all been banned from the living room again, thanks to that Milky thing, who is destroying MY couch, while I languish here on a recliner in the dining room covered with an old sheet ... 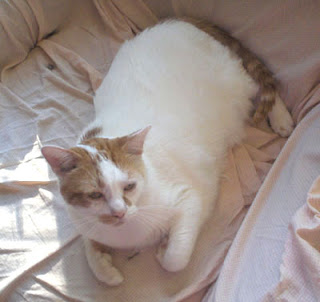 But I'm not complaining ... first, because lots of people have it worse than me. For instance, my AlmostDad Jim, went through a heart catheterization Monday. But YAY, the good news is, he only has a couple of minor blockages and won't need surgery!!

And there's my friend KC's family and all my other friends in Texas who are having really serious problems after Hurricane Ike. We're all purring & purraying for them, and very grateful to the Taylor Catsssss for keeping us updated.

And there's another reason I'm not complaining. I've heard rumblings around Artsy Catsy that the human artists will probably have to try to find a good furever home for Mr. Milky because even after his hoohaectomy, he doesn't seem to be a good team player. My mom is very upset and sad about it, but she thinks he's just been outside surviving on his own too long for him to realize that other kitties can be his friends. I've tried to be his friend and interview him for a job on my staff, but if he even sees me through the living room door, he tries to kill me.

So I think I'll just languish here on my old sheet on the recliner.
Posted by Artsy Catsy at 6:26 PM

Oh noooooooesssss Mr Milky YOO is not nice! Yoo has to be nice to the beans and to the other kittys too. They took yoo in and shared all their goodness wif yoo. I tell yoo though, when I first came inside even though I was a kit, I was scairt too. I even gotted the mom with my claws on her face. I am okay now but whew it tooked me a while to get myself together.

Shredding is not nice, Mr. Milky! We understand, Rocky. Mr. Milky will probably enjoy being in single cat home much more. We just think it's so wonderful that he has a chance to live a wonderful life!

So, Mr. M: I think you are probably meant to be an "only cat" with some really nice Beans who can pay attention just to you. You will not have to share, which you don't seem to be getting the hang of, eh? You were really lucky when you found Artsy Catsy though, because now you will have a great furever home and be all healthy n stuff. The Woman and I are glad you are okay now, and know the Artsy Catsy beans will take good care of you until just the right place comes along. Till then, try to be nice. (I'm a former feral guy myself, and I am not so friendly with beans either, and I am an only-cat. It's a pretty good gig!)

I am glad that Mr Milky came through the surgery good. I am also glad that news about Jim was good too.

Purrs for everyone who is struggling!

Wow, Rocky, you are a model of patience, buddy. Maybe Mr. Milky will do better in a home without so many other kitties, if he never learned how to share. I am glad his hoo-hah-ectomy went grate and that Mr. Jim is doing okay!
Your buddy, Jimmy Joe

Poor Artsy Catsy crew. Naughty Mr.. Milky. I'm sure someone is looking for a milk spokescat... who has no furniture they care about.

this is what the VET thinks I would do if my beans broug me a sibling home. especially at first.

i'm glad Mr. Milky come thru his surgeries OK. Bendrix is excited because those sofa pictures look like Mr. Milky may have an evil alter ego...

Hey Mr Milky you need to relax. Having so many things happen in such a short time must have you really scared and confused. Rocky and the human artists are just trying to be nice to you and give you a good home.

Rocky, you're a real trooper!

Maybe Mr Milky will calm down after a few days at home. He is such a cute boy. I hopes he get the forever home he deserves!

Awww...I was hoping Mr. Milky could stay. Maybe he's like Buddah and will just take a while before the missing pieces take effect and he calms down. Buddah was a total crackhead for a while afterwards, too.

(and don't tell anyone, but I got...um...urjes...for a while after mine. The Woman said I was a pervert cause I licked...well, never mind. But all that went away after a short while...)

Oooh we has beeen hanging on a Mr Milky update!
Firstly that is such great news about your almost Dad Rocky!! :))

This is very sad that Mr Milky is an angry kitteh.
Is they just hissing and chasing or is it that blood curdling screeches and trying to hurt each other?

I know when I first camez to my new home got hissed and yelled at heaps and heaps, but that was just Mushka telling me she was boss.

However ifz they is trying to kill each other this is not good and like others said, maybe he is just a loner?/
Silly Mr Milky, you has a beautiful families there for the taking ifn's you learnt to share and be respectful.

I was hoping that Mr. Milky would start getting along with the other kitties. There must be someone out there who wants to give Mr. Milky a forever home.

Great news on da Milky and almost dad fronts...by da way, when Speedy hadded his snipsnip Dr G sed to keep him away from us fur awhile, he sed dat it can take up to 2 weeks fur da hormones to even out. Speedy was okay after about 3 days tho.

What is it with cats and couches?
I am glad Mr Milky is feeling better, and wish he would calm down a bit so that he could stay put.
He is lovely, and I am sure that there are beans out there that would welcome him lovingly into their home

We're glad that your almost dad, Jim doesn't need the surgery. That's good news.
We don't know how old Mr.Milky is, but if he's had his hoo-ha's for a while, he knows what they are for, so it will take longer for those old tomcat hormones to get out of his system, unlike young males who never really know what they have lost. We hope he does calm down.

I'm glad the op went ok for Mr Milky and that he's home and feeling good, he certainly looks good.

It can take a little while for the testosterone driven behaviour to fade, so I'd give it a bit more time and try some small supervised minglings.

Sometimes when we cats get lots of attention when we are sick or injured we get a little over attached to our priviledged situation and care givers, and that can make us more feisty when we have to integrate with da other cats and share. This happened to me when I decided to move into a house with other cats for the first time. Now I get on well with every cat.

George Online Cat would be a good cat to ask about this sort of thing, he's very wise and helpful.

Hang on in there Rocky fella!

Gee Mr Milky, you don't make it easy for yourself do you ? I still think you will calm down when those old hormones finally work their way out of your system. However, you weely musn't shwed the furniture or attack the other kitties !
I am an only cat cos I don't weely get on wif ofer cats so I unnerstand your predikament. I would weely like to think you could stay at Artsy Catsy but ..well lets see what happens. Good news about almost dad Jim.

Come on Mr. Milky....work with us here! You need to calm down and play nice with the others!

If it makes anyone feel anybetter, it took a little while for each Taylor Cat to be accepted.

Oh, that is wonderful news about almost dad Jim. We are sending lots of healing purrs to him!

Hang in there, Rocky. It will take a few weeks for Mr. Milky's hormone levels to subside - he had already made plenty that are circulating and bound to proteins and stored in fat. OK, well, looks like he doesn't have too much in that last category. Anyway, hoo-hahs may disappear overnight, but hormones take a while to clear.

I know this is probably a silly question, but have you tried the evil spray bottle with Mr. Milky when he does not-so-good things like hiss and scratch? And I think that ZS&S are right, sometimes it takes a few weeks for those hoo-hahs to realize they aren't there any more!
Mommy said that if we were not already here that Mr. Milky would be living in O Hi O. She has a very big crush on him. This does not please us one bit.

But time will help.

He will eventually ease back into himself and the comfort of himself and his surroundings.

He is a very pretty kitty.

Give him some extra love and lotsa hugs and rubs. the attention will ease him and reassure him.

Oh what a wonderful blog! I am brand new to cat blogging and am thoroughly enjoying visiting around the block! ;o) I love the "hoohaaectomy" or however you spelled that! LOL! Hope you can stop by and visit us! ;)