Hello, dear readers, it's Lucy! As Artsy Catsy's Spokesmodel, I have many contacts in the media, so I'm going to try my paw at investigative reporting and whistleblowing.

I have discovered a deep, dark secret about our CEO, Rocky. While hiding behind a plant with my spy camera and hidden microphone, I observed him opening our mail. As you can see, he pushed all other mail aside and only opened the thank you card from Lilly Lu, which contained pictures of Lilly, Mu Shue and Iris. You will note that he immediately put the picture of Lilly on top: 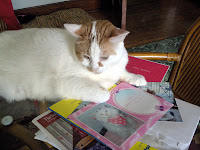 Then I caught him moving Lilly's picture over by his precious cigar ... and he started purring and caressing Lilly's cheek! 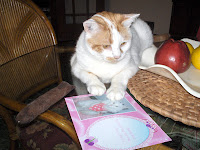 But here's the real scoop! Look what he did next: 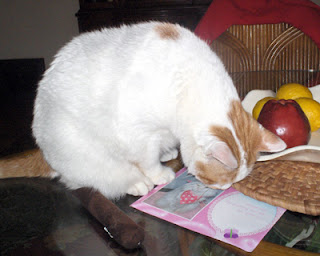 Rocky, CEO (Cat Executive Officer) of Artsy Catsy has been caught on camera KISSING Lilly Lu in his executive office ... with a nip cigar nearby! Is this grounds for impoochment? Will he deny his illicit actions and say "I did NOT have kissing relations with that cat!"? And what will Jeter Harris have to say about this?

Lucy, Artsy Catsy investigative reporter, live on the scene with breaking news of the Rockygate scandal ...

Labels: I did NOT have kissing relations with that cat, Investigative reporting, Rockygate, whistleblowing

I love your investigative reporting, Lucy. Rocky has some explaining to do.

Rocky, I have no doubt there's a good explanation.

Oh my goodness! Well, it was only a photo of Lilly Lu, so it is still a scandal?

What a single mancat does behind his own desk is his bizness...
Shut up Speedy, oh, akshooly I agree! Omigosh, I'm agreeing wif Speedy da yutz. Now there's a scandal~Zippy

Oh my, you have it all on film. How can he deny this??

Oh my Rocky... I'm purrless! P.S. you are on our blogroll already!

Hmmm... Excellent investigative reporting, Lucy. It is a very interesting situation. My question is, does Lilly Lu have a boyfriend? If she is taken, then he really should not be thinking of her that way...

Lucy, that was some very good investigative journalism.

Maybe a memo on company policy should be sent out. I'm sure there is something in there about licking photos, right?

Well, I don't blame Rocky for mooning over Lilly Lu, because she is very beautiful! As long as he does not neglect his duties. Good reporting Lucy!

Rocky, I bet you were just cleaning up something you spilled on that picture right? Maybe you could meow really, really loud and your human would let you out.
Lucy you are very good at reporting. Keep up the good work. let us know what happens next.
Samantha & Tigger

Furry good reporting Lucy, Rocky can't deny the evidence. Does he also disappear without warning? You will have to start following him.

I bet Jete will be laffin an laffin!

But whut was Lilly Lu doing sending provokutive fotos to Rocky??? Can Rocky be blamed for going nuts over fotos like that? I meen, any red-bludded cat wood git urjes looking at LL in her kyoot owtfit! (Ixsept for me, of korse, cuz I only have urjes for Daisy.)

Oh my! Sounds like Rocky may need to make a few True Kitty Confessions!

OMG! No CEO is safe!

oh wow! I bet Jeter won't be that mad - Lilly Lu is a beautiful girl!

Gee, Rocky, I don't know... if you need a good lawyer, see Finnigan J. Katz; he's in semi-retirement but really got me out of a jam.

Well, when a single boy kitty sees a pretty single girl kitty, what's he supposed to do??? I mean, sometimes pictures are all a guy has, and kissing is harmless enough...right???

Lucy, that is very good investigative reporting. We are wondering what Rocky will say about this??? However, how scandalous can a thank you card be??? Anyway, we're glad that you all are back to work!

so rocky kissed me he is my best freind and he kissing me in a best freind kind of way and mu shue said that nip stuff is strong I
dont know becuse i dont like nip.

fact two Rocky allways is there wiff a paw of support like when JH said his faviort flowere was Daisy and when the red sox lost to the yankies I could not lean on JH becuse well he was laufin and lafin and i was cryin and cryin but it okay becuese we all know my boys will win in the end and we all know they ahead in the Al eeast I just need a best freind to remined me of these things. I luff rocky he a great best freind in the whole wide world !!! Pluse mu shue said I try and Kiss lilly lu every morning and i land up wiff a paw in the face so i have no chocie but to sit on her heed

Wow, that's kind of incriminating! But Lily Lu is very pretty and it was only a photo, not the real deal. WHY was Lily Lu sending her photo? I'll bet there was a good reason 'cause Mu Shue and Iris sent theirs too!

Oh no! I am laffin an laffin!

Wow Lucy, you are amazing!!!

Hehe, now I've got to see what Rocky has to say to this!

I think Rocky may need glasses and just wanted to get a better look at his good friend Lilly Lu.

PS Rocky, if worse comes to worse, "It wasn't me" is always the best fall back!

okay Rocky - what have you got to say for yourself? (she is purrty hot stuff though, isn't she?)

Wow. Relations... cigars... it all sounds a bit familiar. Thanks for the scoop, Lucy! Keep us posted.

Lucy, you are a good reporter. Rocky, do you have something you want to tell us? Lilly Lu too? ;)

Rocky, it's alright to have kissing relations as long as neither party is spoken for. You have to be above reproach when you are in a position of power. FAZ

Surely there is another explanation. Do we get to hear Rocky's side of the story?

Just checking in to see if Rocky has responded about this need for glasses....

MOL!!! I can't even compose myself enough to post a decent comment! Rocky? Anything to say for yourself?

is there anyone we can write to to tell them that you is not a spam blog?

we is purring for yoru Grampa Bob.

Rocky I got that message once. Click on the message that explains it. I did that and it went away. We got it when we did a number of Feng Shui Friday posts all at one time. Then it went away the same day. I think blogger thought it might be a spammer taking over.

I can't believe they would think you were a spam blog!?!? That is very dastardly of them...would you like me to kick their....?

In the meantime, we are all purring hard for your gpa Bob!

This is terrible! How could they think you are SPAM?? I hope you can fix it!

DPB strikes again! I have emailed Blogger to protest!

I sent an e-mail to Blogger. They are very BAD to do this to you.

I am sending strong healing purrs to your Grandpa Bob. I sure hope he gets better soon.

Where's DP Blogger? When I find that Robot, I'll hiss and spit and whap, whap, whap, and growl and, and, and I don't know what else, but it won't soon forget my wrath! Don't mess with the Attack Tabby!

Ok, I feel better now. I vented... or more appropriately, yacked a hairball, at DP Blogger. I suggested that they correct this before hundreds of angry blogging cats descend upon them to yack hairballs on their servers. Just see if we don't!
If you can sneak into the hospital, your grampa needs what Victor calls Fur and Purr Therapy. It's guaranteed to make any human feel better, unless he's allergic.