For Mancat Monday, we travel to Italy to present a photo gallery of Fred, President of Artsy Catsy's European Division: 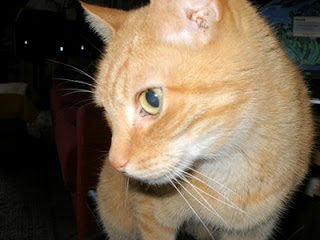 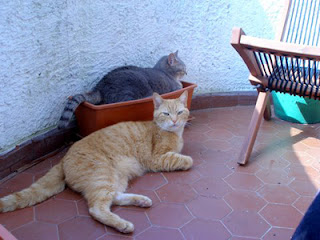 Fred and his Catministrative Assistant, Holly, live in Cerenova, Italy, 30 minutes north of Rome, where they maintain a balcony office overlooking palm trees, Mediterranean pines and, in the distance, the sea. Holly keeps Fred organized from her own efficient cubicle. 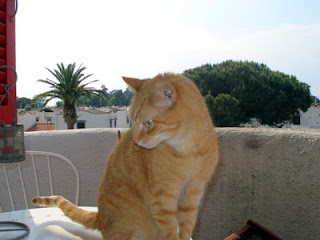 Fred and Holly are currently in the process of moving from their Cerenova location to a new office in the center of Rome. Fred is directing the move from his executive office chair: 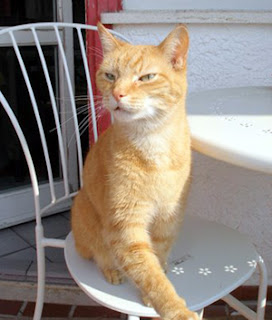 Fred and Holly were both adopted from the Bloomington, Indiana Humane Society ten years ago by Artsy Catsy's human musician, Tiffany. After traveling the U.S. to train for their important post abroad -- and learning to meow and purr in Italian -- they boarded an intercontinental flight to settle in Italy.

After living in Italy for four years, little of his Hoosier heritage is apparent. Fred is now an urbane, sophisticated mancat, il gatto italiano, living la dolce vita in Italy. He looks forward to relocating in Rome, where he plans to escape his office whenever possible to roam the same streets walked by Roman emporers such as Julius Caesar and prowl structures that were built before the time of Jesus Christ. 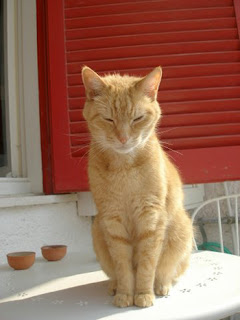 Buona sera a tutti! This is Tiffany, official Artsy Catsy musician and owner (slave?) of Fred and Holly. I've just returned from a long, hot day in Rome ... a morning full of teaching, practicing and playing piano for MY teacher's lessons (I do it all; it runs in the family!) and an afternoon and evening of trekking Rome, looking for accommodations that meet the standards of my finicky felines. For the same rent I pay in Cerenova, outside Rome, where my Boobies (my special name for my 'Quitty Quats', or, well, cats) have been living la dolce vita in a 2-story, 2-bedroom spacious apartment with balcony one mile from the sea, I can get a nice ... ROOM in an apartment in Rome. Sigh .....

If Fred & Holly only knew how much I love them. I could live at my voice teacher's house FREE ... but he doesn't want cats in his house. Now, he's a lovely person, so no hissing and growling is called for. He loves animals, but just isn't as 'catsy' as we more evolved humans are .... so, I'm basically renting a room just for my kitties!

Okay, it's time for our nightly romp with the feather on the stick!

Fred looks every inch the sophisticated mancat. I hope he's really careful if he does escape in Rome. The traffic can be murder.

Fred is a handsum mancat. I bet it'll be fun for him to explore Rome.
Purrrrrs,
Boni Maroni, Mini, Gree, Sanjee, and Pepi

Wow!! That's a neat story about being shipped all the way to Italy from the USA. Fred and Holly are international travelers. You are very fine Mancat Fred. Wonderful pictures.
Samantha & Tigger

Buona sera Fred
You look like a real sophisticat Mancat. We hope everything goes well with the move furr you and Holly.

You have to go and meet Opus and Roscoe. The live with their former Hoosier mum in up notrth Italy!

Yoo are one lucky mancat, Fred. The furthest I've ever gone is from northern Illinois to Wisconsin. Hardly makes me worldly.

Fred, what a beauty you are! And you are so lucky to have Tiffany, she clearly loves you and Holly!
Tara

Fred, it is good to know that you and Holly survived your trip from the US to Italy. In 2009, I'll be heading the other way across the pond, from Germany to Canada. My humans are very envious that you are so close to Rome - they plan on visiting that city sometime during the next year, since my human mom is fascinated with ancient Roman history.

lucky cats! maybe your voice teacher will finally come around when he sees the cuties!

You guys are so lucky to live in Italy. I am most jealous (especially of the weather). FAZ

Ah Rome! What a wonderful location to be stationed at Fred!

how very exciting! how would you meow "time for the feather on a stick" in Italian?

Miss Tiffny, you are a good human serfant to Fred and Holly. I'm sure they will reward you wif lots of love and purring and stuff.

What world travelers! That idea of a nightly romp sounds like lots of fun!

wow, what a worldly kitty. i'll bet he goes to all the fashionable dinner parties.
i'm sure fred & holly know how much tiffany loves them. it just isn't felinesque to be to affectionate!

the litter cabinet sounds really cool. i wonder if i can get mommy to put cat doors on all the cabinets!

Fred is very handsome and reminds me of my Manny. I bet those two would live it up in Italia!

Wow, such exotic Italian names, Fred an Holly. Ow! Hey, what was that fur? I was NOT bein stoopid!
Scuse me, I gots to go teach Bonnie sum manners. Like not readin ofur my shoulder.

Is Italy anywhere near Catifornia? Cuz my boy's goin to Catifornia fur a week an I wanna find sum cat to watch ofur him fur me.
Purrs!

It is so great to meet your staff in Italy. They are great! obviously very in charge and efficient. And it sounds like they have Tiffany wrapped around their paws.

Fred is very handsome. I hope he and Holly are very careful when they explore Rome.