Only 3 more days to the Artsy Catsy
Thanksgiving-Christmas fundraiser
for
Cat Friends Helping Friends at the Cat Blogosphere
and the Rescue Farm!
Today, I want to tell you a bit more about the Rescue Farm and I think you'll understand why we at Artsy Catsy want to help them continue their work. Much of their rescue effort is directed at saving animals from shelters who are destined to be euthanized; many of them are sick or injured and considered not adoptable. Jodi and Matt's philosophy at the Rescue Farm is every animal is adoptable and deserves to live. If they're unable to find a home for a dog or cat, they keep it themselves and give it a loving home at the Rescue Farm.

Here are a few heartbreaking stories that, thanks to the Rescue Farm, had happy endings: 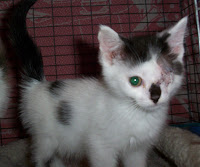 Kiefer is one of more than dozen cats with chlamydia that the Rescue Farm has saved from euthanization at "humane" shelters. Jodi explains, "In cats, this condition causes the eyeball to rupture and is common in cats who end up in shelters and have received no vaccinations. It isn't uncommon for us to have enucleation (removal of eyeballs) performed on kittens from shelters."
Tommy ... 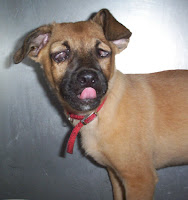 Tommy was only 4 months old when he was brought to a shelter as a stray. The shelter was going to put him down because he was born blind and no one would adopt him. But Matt and Jodi took Tommy from the shelter and found him a home with a child bound to a wheelchair. Jodi says, "They're the best of friends!" 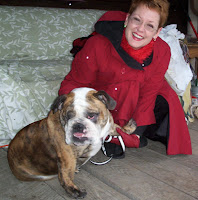 The police brought Norton to the Rescue Farm after he was beaten with a hammer and left to die. After dozens of veterinary visits and an eyeball removal, Norton was adopted and now has a loving home in Carmel, Indiana.

Herbie was shot by someone, and then nearly euthanized at a shelter. But Matt and Jodi saved him at the last minute and got him the surgery he needed to survive.


Not all the animals at the Rescue Farm came there under such tragic circumstances ... but the fact that Matt and Jodi focus their efforts on such special-needs animals makes them, in my eyes, deserving of all the help they can get! You can see their perfectly healthy cats and dogs up for adoption on the Rescue Farm web site, at their PetFinder site, and at area PetSmart stores ... lots of sweeties like this one: 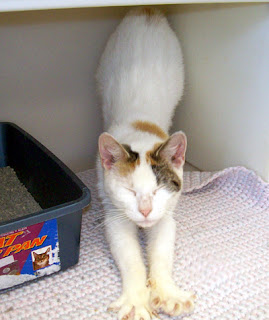 Piazza was dumped at PetSmart one day, but Jodi says, "We couldn't bear the thought of her going to a traditional shelter. She's super cuddly and is great with other cats. She is about 1 year old and has been spayed, vaccinated, wormed, flea-treated and is Felv/FIV negative. She's a stunning little girl with lots & lots of love to share!" (If anykitty out there would like a little sister, just email Jodi. Piazza's adoption fee is $60)

Those stories are both sad and wonderful. Sad because of what was done to those poor cats and dogs, but wonderful because they were rescued by the Rescue Farm. What a wonderful rescue group. I can't wait to see what new products you are going to have so I can help support this wonderful group!

We're getting excited! We will certainly support your causes!

I think Dragonheart says it well. They are wonderful stories because of how these cats were helped, but so sad because of what they had to be helped from.

China Cat and I are glad that the Rescue Farm is doing such good work taking care of every animal. We're excited to see what new items you will have for sale!

Oh my goodness, it's so sad what some humans do and what happens to some animals. What a great organization to help all those pets out. And how awesome of you to help them out!! Thanks for talking about this on your blog! I will come back to read more.
Love Clover xo

Wow, Jodi and Matt are good people to help all the animals that most wouldn't! Great cause. We can hardly wait!
Your FL furiends,