I am a Turkish Van, I tell you!

Rocky: Recently my staff has failed to exhibit the proper respect for me. I have therefore conducted research to prove to them once and for all that I am a famous, legendary, historic, important and rare cat who must be revered at all times.
Rumor has it that I was rescued from a pile of leaves beside a lake. (Water ... that was my first clue. ) There have long been rumors that I came from the heavens. But then I found this photo of purebred Turkish Van kittens:

Just compare these kittens to moi ... 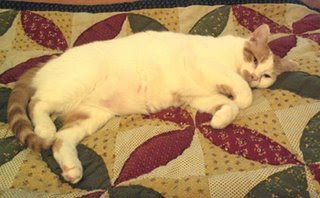 As you can see, there is no doubt that I am an authentic Turkish Van, NOT just some ordinary formerly feral mongrel found in a pile of leaves! Here are more of my renowned relatives: 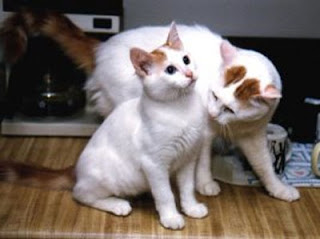 Turkish Vans have a striking appearance, with luxurious white fur and stunning auburn butterfly markings on their heads, with auburn ringed tails. I have all that, and more!
What's more, Turkish Vans are not just your ordinary cat: According to legend, Noah had a hard time keeping the passengers on the ark calm as they approached dry land near Mount Ararat in eastern Turkey near the Caspian Sea. Two cats, smarter and more wily than their fellow animals, leapt into the flood waters to swim ashore.

As the waters receded, these two brilliant cats made their way down the slopes of Mount Ararat to the ancient settlement of Van, on the shores of Lake Van. As they left the mountainside, the cats were blessed by God, and a patch of auburn hair appeared at the front of their bodies to mark the place he touched them. This "Fingerprint of God" is considered to be good luck.

Here is further proof: MY "Fingerprint of God" ...

If you're still in doubt, here's more: Turkish Vans are also known as "Swimming Cats" - they join their humans in the bath, play in their water bowls, fish in human toilets. I am OBSESSED with water! When my human takes a bath, I get in with her and lay on her stomach, and ask her to pour water on my head. When she washes dishes, I have to get in the sink to be rinsed. I stand in my water bowl almost every day and splash everywhere. And I even like to swim: 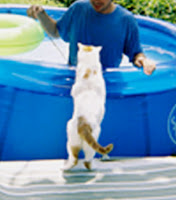 It is believed that Turkish Vans took up swimming to cool off during the very hot summers in Turkey, and to catch fish in Lake Van, especially herring. There you go: my human's last name is Herring!!

Turkish Vans are not vocal. They don't speak unless they have something important to say. I have a tiny voice that I use only in emergencies - my expressive eyes can handle the less important stuff.

Furthermore, Turkish Vans are known to carry things around in their mouths, moving them from place to place, and even play fetch like a dog. I am a master at playing fetch ... and I spent 3 days trying to find the proper place for this trimming from my human's shoe insole ... 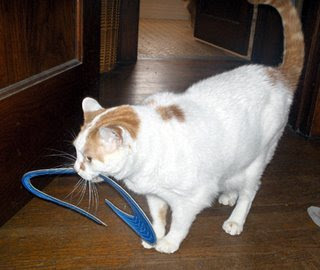 Even though they have an ancient lineage, Turkish Vans didn't arrive in the U.S. until 1982, and by 2002 there were only 100 of them registered with the CFA. The experts say they ... I mean, WE ... are "a large, wonderful, active, intelligent, beautiful, strong, very powerful breed of cats. The Turkish Van is unique - in its history, its color and pattern, its personality, and its ability to survive, virtually unchanged for thousands of years. It shares an area known as the 'Cradle of Civilization' with mankind and is considered a regional treasure in its homeland ...

... It is a breed that is indeed worthy of our RESPECT."

'Nuff said. So show me some respect, you unworthy heathens!! I have been touched by heaven itself, so from this day forward you must honor my ancient Turkish ancestry and address me as:

Staff: How 'bout we just call you "Turkey"?

Labels: I am a Turkish Van you heathens

You know, that is certainly evidence that you are a Turkish Van. I mean, it is pretty obvious, you have all the characteristics!

I have suspected this of you all along Rocky!

Dat's awfully compellin evidance, Turkey... I mean Rocky. Does you got the right build an eye color? Shore looks like it. Purrs!

I sure do, Victor - I'm big, burly, broad-shouldered, booming-butted and have beautiful amber eyes!

Wow, we are very impressed!!!! We thought Vincent who came before was a water cat (he sat under the tub fawcett every day and used the trickle to wash himself). We bow to your water superiority!

Riley likes to sit on Daddy's stomach too when he takes a bath, but only because it's kinda round (don't tell we said that) and he can sit up out of the water. We both play with water, but don't like it if our humans get us wet. Water is good only on our own terms.

hello!
yes yes you definitely have all the god fingerprinting goings on. you are for sure that breed!

Perhaps you swam to shore where you found your human and so now there is one more Turkish Van?

You have made a convincing case, Rocky. You ARE a Turkish Van!

Encylopedia of Cat say the Turkish Van were a naturally occurring breed that happened around Lake Van where the cats would swim out to meet the fishing fleets and get a tasty treat.

Nothing about being touched by god or any of that other stuff.

If you wish to be The Revered Mr. CEO Rocky T.V. Herring!!, fine. You can address me as Bast, Goddess.

My father was a rex van cat kinda guy. He was orange too. I have some van markings... I think I might be a cornish van... hey!
You are way cool!

WOW!!! How about that! You won't look down on us 'ordinary' cats,right?!!!!! Hahahaha
Purrs Mickey

I knew you were special all along! Do the other cat sprinkle catnip leaves in your path when you walk?? Rose leaves may be more "royal" but nip leaves are more fun!

I'll admit, I'm a mongral myself, but having an evil alter ego makes that OK!

Wow Rocky you are a blessed little cat. Fingerprints of God indeed!

We totally respect you, Rocky! They probably named Turkish Baths after you.

If you like water that much, you must be at least part Turkish Van. We personally hate it.

Congratulations on finding our your heritage.

wow, Rocky...you should teach us how to be brave with water & how to swim!

Meaouwy Troops are so glad now coz mommy coming back to home & if you wanna find out inside our brain & comparing to humans' brain, try sneak peek at Felinesophy

Well you certainly convinced me :)

We may still need some convincing... are you sure you didn't use some great photoshop work to pull off that look? J/K
-3 tabby terrors

Oooh! Do you think That Thing is a turkish too? He simpwy woves the water! He doesn't have any fingerpwints fwom God though, but that may be because he's too naughty.

Just stopping by to wish you a wonderful weekend! Rocky, as for being a Turkish Van, you certainly convinced us!!!

Wow!! Rocky you have convinced us that you are a Turkish Van and such a fine example of one, too!
Your FL furiends,

With all that evidence, you got us convinced.

Hahaha, Turkey! Ooops, sorry, the Rev Mr CEO Rocky Herring. Nah, Turkey is easier. No respect at all, these stray kitties, I hear you say.

Well I'm convinced! Those other kitties are just jellis!

Rocky, I agree with you completely! I think you are a Turkish Van and have been touched by Heaven! I sure hope you start getting the respect you deserve!!!!