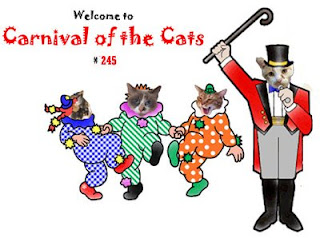 Our first attraction is a real treat! Puddy has gone crazy at A Byootiful Life … crazy for Temptations!
Speaking of treats, there is one snazzy-looking pussycat over at Blog d’Ellisson. You don’t want to miss Her Ebon Splendor.
Behold the beauty of Tiny as art imitates life imitates art at sisu.
And Tamir at Friends Furever has become a proud member of the Gorgeous Gingers. Congratulations, Tamir!
Some seriously cute kitten blogging is happening at Bloggg ... "Come visit me NAOW!!"
Don't doodle around! Go learn all about the perfect First Dog at Katie's Kitties. The Obamas are considering a Labradoodle (or would that be an Obamadoodle?)

Then go feast your eyes on some purrfectly wonderful kittypics at Elms in the Yard ... 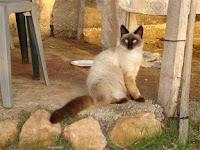 On Fierce Fighter Day at Manx Mnews, Abby purred a beautiful tribute song to those who came before.

And The Poor Mouth pays tribute to Oscar, Robyn's predecessor as alpha cat at Hope Cottages.

Eric and Flynn pay a lovely tribute to the kitties who came before and brought so much happiness into their mum's and dad's lives.

Kashim and Othello are remembering their angel brother Paul.

And Mr. Milky guest hosted Fierce Fighter Day here at Artsy Catsy.
Naughty and Luna are houseguests at the Cat Realm … and they’re asking for your vote!

It's fair weather at Texas Oasis, where Blueberry continues the Tour de Chairs and soaks up some passive solar heat.

Elsewhere, the weather outside is frightful! But Phoebe gives us an important lesson on how to be a cozy cat on a snowy day.
Samantha and Mr. Tigger are freezing over at Life from a Cat's Perspective.

At The Catboys Realm, Kashim and Othello are weathering the first snow of the year by taste-testing pumpkin bread and snuggling in bed.

And Edison settles in for an afternoon snooze at anniemiz. What a long shelf life he has! ... 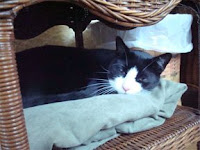 Even though it's only November, Perfectly Parker and her family are already missing their deck.

Only November? That means it's holiday season! Tristan at Tabbylicious says, “Turkey Day is coming and looky! Looky! I caught me a turkey!” Go check it out and take a Turkey Trivia Quiz.
And at Cat Whisperer, Timmy (who was named for Tiny Tim in A Christmas Carol) is asking, “Is it Christmas yet?”
At Willow's Cat Blog, Sadie Katie won the Halloween Dress Up your Squillion contest and had a Fun Friday opening her contest presents.

Carnival of the Cats is not only fun and games but education, too. At The Pets Central, you can learn about caring for your cats’ teeth, or what to ask before bringing home a kitten, or get info about cat care web sites or basic cat health care.

At iinfidel, Cece spent the week in some serious inspecting and more inspecting of the housepainting.

And at Mind of Mog, there are nosekisses, wordless wonders and tummies, too!

Luna is still in exile in the CatSynth FEMA Trailer, but as you can see is doing quite well ... 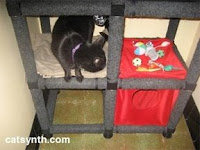 Read the Weekend PersePHONY Report at Jack of All Shades and Shadows ... wild human fingers are running rampant!

And don't miss the story of two lovely and lovable ferals at House of Chaos.

At StrangeRanger, the good news is that Ivy is doing well ... but Maddie is attacking the papparazzi!

Great job! Thanks for hosting the Carnival!

Great Carnival, lots of stuff going on. Love the graphic, too.
ML

hehe that is lots of fun Rocky! :)

Thank you for a wonderful Carnival!

Skritches to your furry ones.

What a Brilliant Carnival! Great job and thanks so much for hosting!

Great hosting and a great graphic, too! BTW, please remind your beans that my book, The World is Your Litter Box, makes a great holiday gift. It’s only 9.95 green papers and is available at Barnes & Noble and Amazon.com.

Thankyou for coming over to visit me when I was sick and for all the healing purrs that you left. I am much better now; just need some turkey to fatten me up.

Happy Thanksgiving to you all. I am truly thankful for all my kind and caring furriends.

Just dropped by to wish you all a happy thanksgiving!

You have a nice site. If you would like to know How To Drive Traffic To Your Blog/site visit my.

polo ralph lauren RED! Series of design criteria - stylish, simple, self-cultivation. For the first time in 2009 in New York Fashion Week debut, RED! Series has a new Polo Shirts On Sale series from the traditional burberry polos LOGO, LOGO traditional crocodile logo at the Ralph Lauren Polo Shirts letter above, and the new series of letters with the cheappolos logo in line to be between a red symbol of Burberry Polo Shirts.

Although many people criticize ed hardy clothing for having nothing but tattoo patterns, being filled with waste and useless things, it is widely acknowledged that ed hardy clothes draws the most attention of both common young people as well as many Hollywood welcomed stars for its punk ed hardy t-shirts rock styles. As a matter of fact, in such a world where all ed hardy shirts are much like each other, ed hardy mens creates yet another totally new global sensation in fashion crowd for ed hardy womens fancy design. An increasing number of people are charmed by the magic of amazing tattoo and impressive color of ed hardy sunglasses.

The larger that the head size is for your babolat pure drive, the more power you will be provided with. Additionally, a larger wilson k six size means a larger sweet spot which is why beginners as well as intermediate players often prefer to work with a head microgel with a larger head size. Additionally, thicker frames are also capable of generating more power as well. Smaller head sizes on prince-o3-tour on the other hand are capable of providing less power, but significantly more control cheap tennis racquets.cheap ed hardypolo shirts cheapcheap tennis racketsdiscount tennis racketsralphlaurenpoloshirtscheappolospolo fashionpolo logopolo shirts in voguepolo women clothinged-hardy shirtsed-hardy sunglassesed-hardy logopolofashioncheaptennisracquetsed-hardy sunglasses

This is a style of sky blue The Women's North Face outdoor and mountaineering apparel .The North Face offers advanced fabrics and technologies for all-weather performance and protection during demanding outdoor action. The design adds darts at the elbow, allowing for easier arm movement and a full range of motion. The internal wind skirt effectively keeps snow and wind out.
100% Omni-Tech!
100% SATISFIDE YOU!