Our Year in Pictures

Rocky: As 2007 comes to a close, we're reminiscing with pictures of some of the high and low points of our first year of blogging:
.............................
As you know, my dream is to use my human artists' skills to help kitties in need (and also to keep us in stinky goodness!) Without YOU, we couldn't do that! Mu Shue was the very first kitty you helped, and wow, how you helped! In February we held a Bookmark Benefit for Mu Shue to help pay his v.e.t. bills, and in less than 24 hours, you helped us raise $660 for Mu Shue's radiation treatments! Here I am helping the human artists create all those bookmarks -- more than 60 of them: 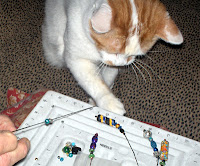 Also in February, Lucy was honored with an invitation to join the Pink Ladies Gang! Here she is in her gang colors:

In March, war broke out in the Cat Blogosphere and I was called upon to give my State of the Cat Union Address: 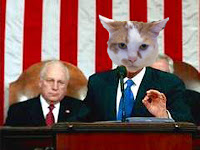 In April, I suffered an attack of glandular hyperplasia in my ears, and was forced to fight back against the treatment:

In May, I got to go horseback riding: 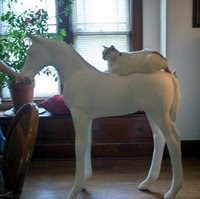 In June, Blogger wrongfully accused me of operating a spam blog and I was incarcerated and tortured at AbuBloggerGhraib prison:

I became the Great Pumpkin: 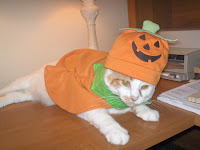 And tussled with Santa Claws: 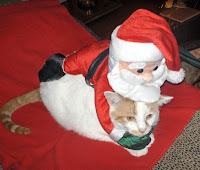 And now, as we say goodbye to 2007, we're polishing our nip champagne glasses and getting ready to ring in the New Year tonight with all our fantastic friends at Dr. Tweety's Grand New Year's Eve Party! See you there!!
Posted by Artsy Catsy at 12:45 PM

It's been a very busy year! You have been so generous in helping others. Happy New Year to all of you at Artsy Catsy!

What an eventful year!!! I can't wait to see what happens next year!!!

Happy New Year Rocky and all the Artsy Catsy Gang and your human staff!
Your FL furiends,

Happy New Year to you and yur fambly! We wish you all the bestest in 2008.

Happy New Year to you and yours -- I hope it's your best year yet!

It really has been an amazing year! Here's to an even better 2008. Happy New Year!

Happy Noo Yeer Rocky and ala yall. Wasn't it a wild yeer? 2008 is gonna be grate!
Purrrrrrrs,
Alla Us Hotties

Pee Ess. Mommy is laffin and laffin again at "we must put the "fun" back in dysfunctional and learn to all just cat along." frum yore state of the catunion address. I putted it on the about page of the Cat Blogosphere for her. hehehe

Sounds like y'all had a great year. We hope that 2008 is even better. Happy New Year.

What an exciting year you've had there! We appreciate all that you do and LOVED the items we got from Artsy Catsy this year. Happy, Healthy 2008 to you and your beans!
Purrs,
Mr. Chen & Ollie

That was very wonderful to see the year in pictures!!!! Thank you for it!
Happy New Year to you all!!!!
Karl and The Cat Realm